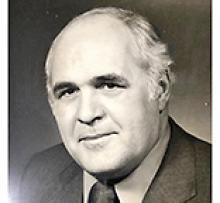 Our family is profoundly sad to announce the passing of our father, grandfather, and great-grandfather, Frank Edward Woods, in Winnipeg, Manitoba, on February 10, 2020, after a brief illness.
Frank would have celebrated his 87th birthday in August, 2020.
Frank will always be loved and remembered by his four children, David Woods, Mark Woods, Cindy Bauer (Kelly), and Donna Kotchon (Wayne); eleven grandchildren; seven great-grandchildren; and by his very special friend, Edna Lawryniuk, and her family; his favourite niece, Brenda (Robert) Nolin; and favourite nephew, Randy (Christine) Woods; as well as by numerous relatives and friends that held a special place in his heart. Frank is predeceased by his loving wife, Marie, in July of 2011; and his daughter-in-law, Kim Woods, in June of 2016.
Frank was born in Vancouver, BC, on August 10, 1933, and came to Winnipeg at a very young age. He attended school in the north end of Winnipeg, and completed his education there. Frank met his wife, Marie, in Regina in 1954, and they were married on November 5, 1955, and settled in Calgary, eventually moving to Winnipeg in August of 1964, with three kids in tow. Their last child, Donna, was born in 1965, in Winnipeg. Mom and Dad bought their first house in River Heights in 1966, raised their four children there, and then in 1977, moved to St. Clements to pursue Dad's dream of raising thoroughbred racehorses. In the mid 1990s, Mom and Dad moved to Winnipeg Beach, to enjoy retirement at the family cottage. However, Dad never really retired, and continued to dabble in different activities throughout his life. In 2011, after the death of Mom, Dad came full circle and moved back to Winnipeg to be closer to his children, and it is in Winnipeg where he lived out the remainder of his life. Dad was never one to be afraid to take a chance, and had a varied career throughout his life. Dad worked for the CNR, an automotive supply firm, a financial institute, was self-employed, was a horse farm owner, politician and accountant, in addition to husband and father. He was an extremely intelligent man, with a strong opinion, who loved a lively political discussion. In his later years, after Mom passed, his friend Edna and her family brought much joy to his life. Frank has loved and touched so many people in his long life. He will be missed dearly and lovingly remembered.
The family would like to extend a special thanks to Dad's cardiologist, Dr. Tam, and his team at the St. Boniface Hospital for the care and compassion they provided in the last 18 months.
Cremation has taken place, and the Mass of Christian Burial will be held at St. Joseph the Worker Roman Catholic Church, 505 Brewster Street, Winnipeg, MB, on Saturday, February 29, 2020, at 11:00 a.m.
Honorary Pallbearers are: Jesse Woods, Jamie Woods, Matthew Jolly, Ryan Kotchon, Jason Kotchon, and Corey Vlaming.
If desired, please make a donation to a charity of your choice.