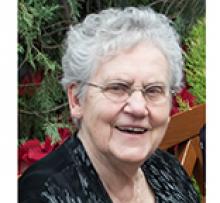 
It is with deep sorrow that the family of Mina Peltz announces her passing after a brief illness, on February 12, 2020, at the age of 82 years.
Mina will be lovingly remembered by her son Mark (Lisa), daughter Nicole (Ben) Nichol, daughter-in-law Tracey; grandchildren, Ashley, Keegan (Samara), Jason, Ryan, and Robyn (Frank); great-grandchildren, Lachlan Anderson and Sophia Peltz; and sisters-in-law, Eleanor Berezuk, and Dody Budge. She is also survived by numerous nieces and nephews and their families.
Mina was predeceased by her husband Edward, and her sons, Bill and Robert. She was also predeceased by her parents, Phillip and Barbara Mattern; brothers, Phillip (Mary) Mattern, Charles Mattern, Ernie Mattern; sisters, Barbara (Bill) Smith, and Dorothy (George) Schwitek; her parents-in-law, William and Annie Peltz; brothers-in-law, Stan (Josephine) Peltz, Casmir (Eleanor) Peltz, and Stephen Peltz; sisters-in-law, Mary (Joe) Moran, Frances (Steve) Berzuk, Jean (John) Gerstmar; and brother-in-law Emil Berezuk, and several nieces and nephews.
Mina was born on June 15, 1937, in the log cabin on the family farm in the community of Dog Lake, Manitoba, in the RM of Woodlea. She attended school in Dog Lake, where she completed grade eight. She continued her education by correspondence under the tutelage of the teacher from the Dog Lake School.
Mina left home at the age of 17 and went to live with her Aunty Chrissy in Warren, where she helped run her aunt's café. It was during this time that she met her future husband, Edward Peltz. Upon turning 18, she moved to Winnipeg with two of her friends, and went to work for the Winnipeg Free Press. She worked at this job until she married.
Mina married Edward Peltz on June 6, 1959. They took over the family farm in the mid 1960s where they raised their family. She spent countless hours and drove many miles ferrying and cheering on her four children with their sports and activities as they grew up. There was always somewhere that someone needed to be, and she would ensure that they got there. This continued on with her grandchildren. She resided on the farm until her health deteriorated to the point that she had to leave.
Mina was actively involved on the farm with her husband Ed. They worked side by side, raising various types of livestock, and grain farming. She drove tractors and grain trucks until the boys were old enough to help on the farm. Mina particularly enjoyed raising her chickens, geese, ducks, and sheep. She took great pride in her flower and vegetable gardens. Her gardens were always bountiful, with plenty to share among family and friends. She was renowned for her homemade dill pickles, canned fruit, and jams. She was also an incredible cook. No one ever left her table hungry.
Mina was also very involved in the community. She was a member of the Warren United Church, teaching Sunday School and singing in the choir. She was a member of the Warren Hall Board, and actively volunteered at the Warren Arena and Baseball Club during the time that her children were growing up. She was a member parent of the Warren Figure Skating Club. She was also a staunch supporter of her husband Ed's political career. She accompanied him to many different functions, whether they were local, within the province, or interprovincially. She was always there for him.
As the children got older, Mina restarted her professional career in 1981, as an Educational Assistant at Warren Elementary School, and later Warren Collegiate Institute, until she retired in 2002. She worked with many different students, teachers and staff over the years. She had many fond memories of this time, and held a place in her heart for those who had a special meaning to her.
In 2010, Mina took a part time position as a collator with the Stonewall Teulon Tribune. She continued with this work, until 2017. She loved the work that she did, and the people that she worked with.
In 2005 Mina and Ed decided to retire from grain farming. They did however keep raising her chickens and sheep. She decided to end her chicken business in 2010, but continued to raise her sheep until 2015, when they decided it was time to fully retire from farming.
Mina's greatest passion in life was her family. Her love and devotion to her late husband Edward, her children and their spouses, her grandchildren, and great-grandchildren was boundless.
Our mother, grandmother, and great- grandmother will be sadly missed by all of us, as well as her extended family, friends, and neighbours, who held her near and dear.
A celebration of Mina's life will take place at MacKenzie Funeral Chapel in Stonewall, on Saturday, February 29, 2020, at 1:00 p.m.
A private family interment will take place at the Warren Cemetery at a later date.
A thank you must be said to our extended family, friends, and neighbours who came to visit, call or text Mom and ourselves while she was in the hospital, and have continued to keep in touch with us following her passing.
A special thank you to the doctors, nurses, health care aides, and staff of the Selkirk Regional Hospital must be mentioned. The care and compassion that you offered our mother is beyond words that we could ever express. We truly appreciate everything that you did for her and our family.
In lieu of flowers, donations can be made to the Interlake Eastern Foundation for the Selkirk Regional Health Centre, in memory of Williamina Peltz. Donations may be made online at www.iehf.ca or via cheque to the Interlake Eastern Health Foundation, P.O. Box 5000, 120 Easton Drive, Selkirk, MB R1A 2M2.