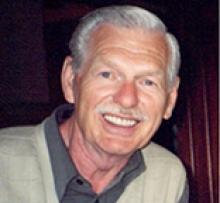 Peacefully on February 16, Robert Mozol "Bob" passed away at Deer Lodge Centre.
Bob leaves behind his partner Marilyn Milne; Bob's children, Mike (Carol), Kim (Ian), Suzanne (Barry); grandchildren, Ashley, Laura, Brett; his great-grandchildren, Malachai, and Nora; as well as the support and love from Marilyn's children, Kim, Sharon and Russell and their families.
Bob was previously married to Yvette for 31 years. Bob is survived by his brother John (Colette); children, Danny, Ricky, Jan, Chris and their families. Bob was predeceased by his parents, Helen Ungehaer and Theodor (Fred) Mozol; and his nephew Lawrie Mozol.
Bob was diagnosed with lung cancer in September 2018. He fought courageously with an optimistic spirit. He was a brave soldier and never complained about anything.
Bob grew up in St. Boniface and went to school in the Norwood Division. He loved to skate and play hockey and lived near Falcon Community Rink. He would go there every evening (after homework) until the rink closed. In high school he was a good softball player and a very good sprinter in track. Bob set a 100 yard dash school record of 10.5 seconds. He and his buddy Don would also ride their bikes from Winnipeg to Beausejour with no money in their pocket. When he was 15 years old he started to shoot Pole Archery and belonged to the Robin Hood Pole Archery Club until his senior. He was blessed by many great long standing friendships. Thank you boys for all the memories.
Bob had various jobs throughout his career working at the Winnipeg Convention Centre and University of Manitoba. He also worked for CP and retired with CNR in 1999 (22 years).
Marilyn met Bob in 1991, asking him "out for coffee". Over the past 30 years they enjoyed walking, travelling, bird watching and a nightly glass of "wine".
Bob was a kind gentle soul, who always had a smile on his face and kind words to say about others. Bob enjoyed his weekly coffee dates (for over 20 years) with his longtime grade school buddy Don Cook.
The family would like to extend their deep thanks and gratitude to the support and love offered by Dr. Susan Green, Team of Angels at both Health Sciences Centre Ward GH6 and Deer Lodge Centre T6. Special thanks to Joanna, Linly and Norene for their heartfelt care. Another angel was Elizabeth, dad's Night Care Aide whose gentle spirit and laugh made dad feel secure.

Bob - Dad - Grandpa - You will be missed.
Rest Peacefully.

In lieu of flowers please donate to the charity of your choice.
Respecting Bob's wishes there will be no service.