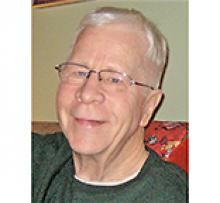 
It is with deep sadness that the family announces the unexpected passing of our dear Wayne, at home, on Wednesday, February 19, 2020, at the age of 80.
Wayne was predeceased by his beloved wife Yvonne Kirbyson, his parents, Bill and Jean (Crawford) Kirbyson, brother Ron Kirbyson, parents-in-law, Tom and Fabiola (Lafreniere) Grafton, and brother-in-law Thomas Lai. He leaves to mourn his daughter Susan, husband Jeff Stephen and cherished granddaughter Claire. Grieving his loss are his sister Joann Kirbyson, sister Jean McClelland (Jim), sister-in-law Dawn Kirbyson, brother-in-law Wayne Grafton (Jonine), brother-in law Robert Grafton (Joy), brother-in-law Murray Grafton (Jessica), brother-in-law Neil Grafton, sister-in-law Judith Doyle (Paul), sister-in-law Mary Robertson (Bayne), brother-in-law John Grafton, sister-in-law Janet McCaffrey (Blayne) and their families. Also mourning him are several Kirbyson and Grafton cousins.
Wayne was born in Winnipeg on December 22, 1939. He resided initially in Carrick, Manitoba and spent his youth in a variety of towns in southwestern Manitoba as well as Winnipeg Beach. Wayne graduated from Belmont High School in 1957 and then went to the Royal Canadian Army Service Corps School in Camp Borden, Ontario, where he graduated in August 1959. Afterwards, Wayne attended Brandon College and graduated in the Class of 1962 with a Bachelor of Arts degree. Wayne was editor of the Brandon College yearbook, the Sickle and convenor of the Radio Club. In his early working years, he held a variety of jobs such as grocery delivery clerk, bank teller, and was part of the Singing Waiters in the Brandon College residence dining room. Wayne subsequently obtained a Bachelor of Education degree from the University of Manitoba in 1977.
After graduating from Brandon College and attending the education training program at the University of Manitoba, he taught for one year at Vincent Massey Collegiate in Brandon before moving to Winnipeg where he taught at Nelson McIntyre Collegiate, Dakota Collegiate and then many years in the River East School Division, retiring from Miles Macdonell Collegiate as an English and Art teacher. Wayne also volunteered teaching art to seniors at Lions Manor. Wayne loved art and literature and enjoyed fostering a love of learning within his students. Wayne was a talented artist and had his first showing of his paintings in September 1998 at Gallery 757 on Corydon Avenue. He also had a passion for creative writing and poetry. Wayne belonged to the Winnipeg Writers' Workshop and published poetry in the Canadian Forum magazine.
In 1962, Wayne met the love of his life, Yvonne, and they were married on June 29, 1963 in Winnipeg. In the early years of their marriage, they spent time abroad visiting London and living in Paris where Wayne studied art at Academie de la Grande Chaumiere and Ecole d'Art de la Ville de Paris and French at Alliance Française. Wayne and Yvonne lived in Montréal upon their return to Canada in 1968, where Wayne taught Art and English at Rosemere High School, studied creative writing at Sir George Williams University and studied art at the Montreal Museum School of Art. They returned to Winnipeg to be closer to family shortly after their daughter Susan was born in 1970.
Wayne took great joy in playing with Susan when she was a child and again with his granddaughter Claire when she was young. I have many fond memories of my Dad. He maintained his competitive gaming spirit right up until his last days, happily winning his last game of Quirkle with me on February 16, 2020.
Wayne was a devoted spouse, father, grandfather, son, brother, uncle, nephew, cousin and friend. He was known for showing care and compassion to his family, friends, students and colleagues. His wonderful sense of humour was appreciated by all who knew him. Wayne will be deeply missed by all those whose lives he touched and enriched.
Shortly after Wayne and Yvonne's 55th wedding anniversary, Mom passed away and Dad was heartbroken. Dad, you are now reunited with Mom as you always wished.
Wayne's life will be celebrated at a service on Saturday, February 29, 2020, at 11:00 a.m. at E.J. Coutu & Co. Funeral Directors, 680 Archibald Street, Winnipeg. A private family interment will follow.
The family wishes to express their gratitude to the home care staff that have assisted Wayne over the years and his Home Care Coordinator Tania Stow.
In lieu of flowers, a donation may be made to the charity of your choice.