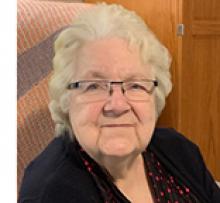 
Peacefully on Sunday, February 23, 2020, with daughter Kathy holding her hand and being surrounded by family in the previous hours and days, Charlotte passed into the arms of our Lord at the age of 81.
Charlotte will be lovingly remembered by many, but especially by her daughters, Kathy (Gerry), Sheila (Colin) and Sharon; grandchildren, Tim, Meagan and Alyssa; great-grandchildren, Emily and Easton; brother Louie (Ophelia); sister Marlaine (Julio); best friend Jean, and numerous nieces and nephews.
Charlotte was predeceased by her parents, Alice and John; husband John; son Ken, and stillborn daughter Ramona.
Charlotte was born Charlotte Marie Beatrice on August 19, 1938, to Alice (nee Campeau) and John Small in Dacotah Siding, Manitoba. She grew up in Starbuck, Manitoba and attended the Starbuck Consolidated School. With her father in the military the family moved to Churchill, Manitoba for several years when she was 12 and she often shared that she felt those were her best childhood memories. Several more moves followed to Picton, Ontario and then Montreal, Quebec where she attended Holy Names High. After graduation she had a calling to serve God and entered the Holy Names of Jesus and Mary as a novitiate, but just before taking her final vows a health concern forced her to reconsider a different path of service to God. She joined the Air Force and then took a job at an orphanage where she was able to take great joy in caring for the children. There she met a co-worker, Bertha who invited her home to a family dinner. Seated at the table was Bertha's handsome brother, John - three months later they were married in Montreal and welcomed their first child, son Ken a year later. After moving back to Winnipeg more children followed, Kathy, Sheila, Sharon and Ramona. Mom and Dad settled in Fort Rouge in Winnipeg where Mom would have support from her family while John worked away from home in Canada's North on the D.E.W. Line. Although a homemaker, Charlotte worked at many small jobs both paid and volunteer. She ran a daycare from her home, sold Tupperware and typed papers for university students, all while maintaining a house and giving her children the benefit of her seemingly tireless self - music lessons and other activities. She joined Scouts Canada as a helper, that led quickly to her becoming a Cub leader, Beaver leader and District Commissioner roles that spanned almost 30 years, receiving the Medal of Good Service and Medal of Merit. The family enjoyed many camping and road trips over the years that crossed the country. Charlotte was a skilled camper whether with family or the Boy Scouts. She rejoined the workforce in 1980 taking a job at MacDonald Youth Services, beginning as a receptionist and working up to being the Administrative Assistant to the Executive Director until she took her retirement in 1998 to care for her father after he suffered a stroke.
After the loss of her husband, John, in 1985 Charlotte continued her passions that included organizing and facilitating family reunions, picnics, searching and developing the family tree and going to Daniel O'Donnell concerts with her best friend, Jean and daughter, Sharon. Daughter, Sheila and husband Colin took over family dinners so she could just enjoy. Sheila continued to feed Mom's love of music taking her to concerts by Rita MacNeil, The Irish Rovers and The Chieftains. Charlotte took great pleasure in her grandchildren, Tim, Meagan and Alyssa and helped them whenever she could and was excited to have great-grandchildren, Emily and Easton. She lived with youngest granddaughter, Alyssa for many years and developed a most special bond with her. This arrangement saw Alyssa take on the role of caregiver for several years, for which Mom and the rest of the family is forever grateful.
Charlotte went on the trip of a lifetime, a gift from family, after her 70th birthday - touring Ireland and France with daughter Sharon. She continued camping with daughter, Kathy and husband Gerry, loved crosswords and all things music. Mom's caring for others never wavered - it was who she was, she was always giving of herself whatever she had. Her faith remained extremely important to her and she prayed the Rosary nightly with a list of anyone she had heard needed prayers, many whom she never met. Even when she lost her words for the prayers she took great comfort in anyone who would pray with her.
Prayers will be held on Thursday, February 27, 2020, from 6:00 p.m. to 8:00 p.m. in Chapel Lawn Funeral Home, 4000 Portage Avenue. Mass of Christian Burial will be celebrated on Friday, February 28, 2020, at 11:00 a.m. in Mary, Mother of the Church Parish, 85 Kirkbridge Drive, Winnipeg.
The family has the deepest gratitude for Kathy always being there for Mom in any way and for keeping Mom's quality of life as the first priority. The family wishes to thank the staff and volunteers at Prime Deer Lodge and Misericordia, Chez Nous and MP1 at Misericordia Place.
In lieu of flowers, if friends so desire, donations can be made for research into dementia to the Alzheimer Society of Manitoba on her behalf.

"Enjoy your well-deserved rest, Mom, we miss you and we love you - so very much.
Until we meet again."