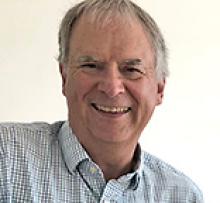 We are heartbroken to announce that on Thursday, February 27, 2020, Robin Michael Kersey died of complications following cardiac arrest. He was surrounded by his wife, children, family, and dear friends.
Robin is survived by his wife, Linda Sander; his children, Sean, Kristin, Amy and Anna; his brother, Ron; his father-in-law, John; his sister-in-law, Carol Chamberlain; his surrogate children, Gui Hua Tan, Lin Lim, Pin Lim and Betty Shah; Sean and Kristin's mother, Lenore; and his nieces and nephews. He also leaves to mourn many dear friends who were like family, including Denny and Eryl Kells, and Arlene Kinden.
Robin was born in Toronto, Ontario in 1956, the youngest of three boys - Ron, Ric (1950 to 2017), and Rob. The family moved to Ottawa, and then on to Sandy Hook, where Robin attended Gimli High School. After two years of undergraduate studies, Robin entered the Faculty of Law at the University of Manitoba. He spent almost the entirety of his legal career at Thompson Dorfman Sweatman LLP, first as an associate and then as a partner practicing Labour and Employment Law.
Robin and Linda met in 1995, and married in 2004. Robin was a loving and devoted husband. He made Linda feel like the most important person in the world, remembering meaningful dates and taking time to connect with her every single day. He was compassionate, thoughtful, generous, and kind. Linda loved Robin's ability to make even the most boring aspect of day to day life into a fun adventure. Linda was the envy of many of her friends who viewed Robin as the perfect partner in every way.
Robin's first child, Sean, was born in 1982. Kristin followed in 1985. Robin loved being a father so much that, after Sean and Kristin graduated high school, Robin and Linda decided to expand their family. In 2007, the whole family travelled to China to adopt the first of the "Littles" - 18 month old Amy. In 2009, all five made another trip to China and 22 month old Anna joined their family.
Linda and Robin moved north of the city to Hawthorne Lodge in St. Andrew's in 2009. In the years since, their home has been the host of countless celebrations - from Christmas dinners to poolside BBQs. Holidays were always memorable, but no event was too small to celebrate and everyone was always welcome. Robin had a huge heart and would never want anyone to feel excluded. Every person who came into their home left feeling like part of the family.
Robin loved going to work at TDS every day. He was a gifted lawyer - a brilliant writer and advocate, but also someone who approached every problem with practicality and his trademark humour. Robin's love of silliness, his goofy sense of humour, and complete lack of pretense or self-consciousness made the office more fun (although quite possibly less productive). His colleagues at TDS were like yet another family to him - especially his long-time assistant, confidant, and friend, Maureen Beal, who managed Robin's life with practicality and good humour of her own.
Robin's enthusiasm for life was contagious. He had a rare gift for making every person feel important and special. He was a cherished father figure for so many - mentoring students and associates, patiently coaching four year old's soccer, calmly teaching many to drive a car, and generously giving time and advice to anyone who was going through a difficult time.
No one enjoyed having children more than Robin. He never missed a game, a dance recital, or a school event - even if it required him to work late into the night peppering colleagues, clients, and opposing counsel with emails at all hours. He delighted in every achievement or experience no matter how large or small - a cycling trip through New York State with Sean to watch the Batavia Muckdogs play minor league baseball (where Robin performed a solo rendition of "Rubber Ducky" atop the dugout); crying while watching Kristin graduate law school; shuttling Amy to every show jumping and dressage event in Manitoba (and beaming with pride when she was selected to represent Manitoba in a national competition this year); and drawing on previously undiscovered talents as a co-star and backup dancer after discovering that Anna has a gift for directing Tik-Tok music videos.
Many people tell their children to live in the present and enjoy every moment. Robin led by example. He made every event, no matter how mundane, feel fun and special. While we are shattered that our time with Robin was cut so short, we know that we are the luckiest people in the world to have had him as a husband, father, and friend for so many years.
Robin would have been enormously touched and appreciative of the outpouring of love and support that his wife and children have received over the past week. Robin's family would also like to thank the wonderful doctors, nurses and staff at St. Boniface Hospital Intensive Care Cardiac Surgery unit who worked so hard and whose care and compassion was a rare bright spot in this unfathomably difficult week.
A gathering of family and friends is being planned for Monday evening. Any friends who would like to join us to honour Robin's memory can contact Kristin at kmk@tdslaw.com for details.
In lieu of flowers, the family is asking for donations to Cardiac Care at the St. Boniface Hospital in memory of Robin. The family has one additional request. Robin loved children and children loved Robin just as much in return. When he heard of a child in any kind of need, he would have cheerfully given anything he had in order to provide everything that was required. We would ask that next time his friends are in a position to help, they think of Robin and do what he would have done. He will smile.


THOMSON FUNERAL HOME
204-783-7211
Condolences may be sent to www.thomsonfuneralchapel.com


Peacefully, on February 27, 2020, surrounded by his family Robin Kersey died at the age of 63.
A complete obituary will follow in the Saturday, February 29, 2020 edition.