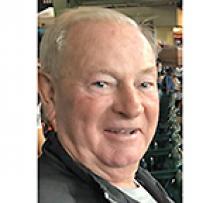 
Peacefully on January 6, 2020, Dennis Thompson passed away with family by his side in Belleair, Florida, at the age of 77 years.
Dennis will be lovingly remembered by his wife of 57 years, Kathy; son Doug; grandchildren, Adam and Charlotte; sister Linda Blake; nephew Robert Metcalfe, along with extended family and friends. He was predeceased by his son Dennis; parents, Kathleen and Erwin Thompson; grandparents, Laura and Douglas Shackell, Janet and Joe Thompson; brother-in-law Richard Blake and nephew Richard Blake.
Dad was born and raised in Portage la Prairie, and proudly called Portage his home. In his early years, he worked in the family business called Portage Garage. He later became President of Portage Dodge Chrysler. Dad was a driving force behind establishing Portage Leisure Centre in 1973 and acquired the Toyota franchise in 1980. His strong work ethic and keen business sense served the companies and his family well. He was a respected businessman and treated people fairly. He also served as a director with the Portage Mutual Insurance Company for over 20 years.
Mom and Dad enjoyed wonderful trips and their life in Florida. Many special friendships have been formed over the years. Dad enjoyed golf in the winter and fishing in the summer at Lake of the Woods with his special companion Niko. He always enjoyed having a project on the go! Our family will cherish the memories and the legacy he has left.
A family service will be held at a later date with interment at Evergreen Memorial Gardens.
Donations gratefully accepted to a charity of one's choice.

A tree will be planted and cared for by
McKenzies Portage Funeral Chapel
www.mckenziesportagefuneralchapelcom
204-857-4021