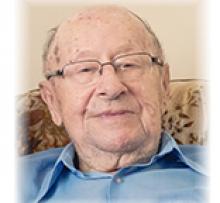 Jaroslav (Jerry) Tokariwski, beloved husband, father and grandfather, peacefully passed away at the age of 91, at Seven Oaks Hospital, on February 15, 2020, with his family by his side.
Leaving to mourn his death are his wife of 66 years, Adeline; his three sons, Gerald (Sharon), Randy and Dean (Melissa), and grandchildren, Bri-ann, Kylie, Jenna and Daniel.
Jerry was born in the village of Borschovychi, Ukraine. He left home at the age of 16 and two years later arrived in Canada. After brief stints working on a farm in Alexander, Manitoba and working construction building houses in Winnipeg, Jerry applied to be a bus driver when the streetcars were removed. Jerry worked for Winnipeg Transit for 35 years, retiring in 1991. He was very proud of being accident free for 30 of those years.
Jerry cared deeply about his family (both in Winnipeg and Ukraine) and worked tirelessly to provide and take care of them. He was also a proud supporter of the Ukrainian culture and the church. It was important to him to pass these onto his sons by having them attend Ukrainian school, dance and catechism. He returned home to Ukraine three times with the last time in the 1990s.
Jerry was a handyman and forever helping neighbours and friends. He built the family cabin in the early 1970s that is still being enjoyed today.
The family would like to express their deepest gratitude to the various nurses and Dr. Gordon Dalling at the Seven Oaks Hospital who provided exceptional care for the short time he was there.
In accordance with Jerry's wishes, a private ceremony has been held.
In lieu of flowers, donations can be made to either Immaculate Heart of Mary School c/o Lubov SSMI Foundation at 204-940-0443 or www.lubovfoundation.ca or St. Nicholas Church at (204) 582-6695.