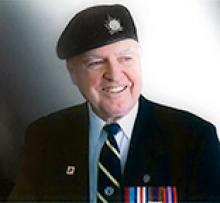 
Stan passed away peacefully at the age of 95 years at the Grace Hospital.
Stan is survived by his sons and their families, Fred (Jennifer), their children, Anthony (Carina), Ian (Amanda) and Erik (Alena), and great-grandchildren, Karl and Hazel of Calgary; and Gary (Tannis), their children, Stephanie, Michael and Thomas. Also cherishing his memory is his sister Doreen; sister-in-law Jean; and his nieces, nephew and cousins, as well as many good friends.
He was predeceased by Hazel, his loving wife of 61 years; as well as siblings, Fred and Ruth.
Stan was born in Winnipeg where he lived most of his life with short periods in Vancouver, Saskatoon and Calgary. He served with the Fort Garry Horse in Europe during the Second World War. Stan returned to Holland many times in later years attending many ceremonies and Remembrance Services where he made many new friends across many generations. Stan was employed at R.L. Crain Ltd. for most of his working life. After his retirement, he became quite active with the Fort Garry Horse Regimental Association where he became involved with the creation of the Fort Garry Horse Monument at Assiniboine Park along with various other projects. He also became a regular fixture at the regimental Kit Shop. Stan treasured his time spent with family and his many friends both at home and at Matlock, where he and Hazel built a cottage that they enjoyed for many summers.
In accordance with his wishes, cremation has taken place. A gathering to remember Stan will be held at Thomson "In the Park" Funeral Home at a later date.
The family would like to thank Dr. Borrett and all the nurses and staff at the Grace Hospital for their kind care of Stan in his last days.
In lieu of flowers, a donation may be made to a charity of choice.