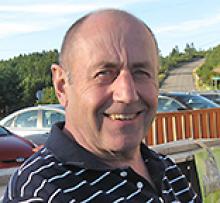 
It is with deep sadness that we announce the passing of our husband, father and grandfather, Horst Angeleau, on Sunday, February 23, 2020.
Horst was born on December 11, 1942, in Northeim, Germany. He grew up in the small town of Buensen where he was raised by his grandparents, Erich and Anna Angeleau.
He will be lovingly remembered by Linda, his partner of 31 years; daughter Trista Sauer (Jason); son Kai (Scarlett); grandson Beau; sister Reni Kreykenbohm (Thomas); niece Anya Kreykenbohm; cousin Ilona and family; and cousin Karen.
Horst was predeceased by his mother and stepfather, Gertrud and Franz Stephens.
At 19, he joined the German army where he would serve for 15 years. Following training as a helicopter pilot, he was stationed in Bueckeburg. Flying was his passion and he considered his time spent in the Army as some of the best years of his life.
In 1978, Horst retired from the Army and on July 1, 1978, moved with his new family to Winnipeg.
His military experience led to a job with Custom Helicopters and later with Great Slave Helicopters, fighting forest fires and working with Manitoba Hydro.
When health issues forced him to give up flying, he started a second career as a painter that he would continue until his ultimate retirement.
Horst was a sensitive man with a wonderful sense of humour. He loved classical music, playing games, the outdoors, and he travelled for as long as he was able to. He had a passion for reading - especially his Stephen King books. Horst was an excellent cook and baker and he spent many hours in the kitchen or in the garden cooking gourmet meals or gathering fresh ingredients. The past five years were challenging for Horst but he never gave up, even as his health was declining. He forced himself to do as much as he could and never complained, often using his humour to lighten the moments.
We would like to thank all of the wonderful doctors and nurses in ICU at St. Boniface Hospital for their kindness and compassion this past weekend, helping us through a very difficult time and a special thank you to Dr. Jillian Horton from Health Sciences Centre who Horst considered not just his doctor, but his friend.
In lieu of flowers, donations can be made in Horst's memory to the Heart & Stroke Foundation of Manitoba or the charity of your choice.
As was Horst's wishes, cremation has already taken place. A private celebration of his life will be held at a later date.

Most beautiful of all from high
Is sunset's crimson glow,
Bursting forth from Rockies' spires,
Fading to every hue of blue.
To be replayed at will,
By flying higher and higher.

Don't cry for me, but cry for those
Who have not flown.
- Bob Kirkby