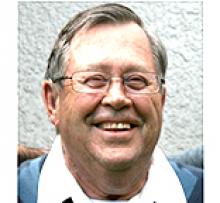 It is with great sadness that the family announces the passing of Edward Clark "Champ" Russenholt, at the age of 86, on February 29, 2020.
Champ was predeceased by his mother Kay; father Ed; aunt Mary; sister Lynne; brothers-in-law, Bob and Don, and sister-in-law Shirley.
He is survived by his beloved wife of 59 years, Fayre; brother Ben; sons, Jeff (Vicki), Ben (Jackie) and Drew (Angela); grand-children, Elliott, Jaxon, Annie, and many cousins, nieces, nephews, great-nieces and great-nephews.
Growing up on Rupertsland Street and Wolseley Avenue, Champ attended Luxton, Wolseley, Isaac Brock, and Gordon Bell schools. He graduated with a Diploma in Agriculture from the University of Manitoba in 1956 and was member of the Delta Upsilon Fraternity. On July 9, 1960 Champ and Fayre were married at Norwood United Church.
Starting in 1950, Champ farmed along the Assiniboine River. In 1963 he began a career at Manitoba Pool Elevators, working first in the Farm Supply Department, then as a Field Supervisor in Southern Manitoba, and finally as an Assistant Information Director in Winnipeg. When Champ left MPE, he worked for a time at Seedex Canada in Carman. The last 10 years of his working life saw Champ employed as Assistant Classified Advertising Manager for the Manitoba Co-operator.
While playing for the Winnipeg Warriors at the age of 24, Champ worked as a practice goalie for both the Jets and visiting teams. He later shared his expertise at goaltending clinics, as a coach at the Silver Heights Community Club, and with the St. James Canadians.
Champ instilled a love of nature in his three boys while spending time fishing, sailing, and playing in the water at Victoria Beach every summer. In the 1990s, they adventured in a 26-foot sloop called TT&A (for "Today, Tomorrow, and Always") that sailed out of Gimli Yacht Club.
After taking an early retirement package in 1996, Champ and Fayre moved to their cottage at Lochwoods Estates on Lake Winnipeg. While living there, Champ enjoyed golfing at Northernaire, swimming at Camp Morton, communicating with others via Ham radio, watching Jack Nicklaus play in the Senior PGA, and creating wood projects using his scroll saw. Following the sale of the cottage in 2011, Champ and Fayre spent time living at Agape Villa and then Dakota House in Winnipeg. In June of 2018, Champ moved to Charleswood Care Centre and then to Golden Links Lodge, where he spent the last months of his life.
The family would like to thank the compassionate staff from Friendly Care Giver Services, Home Care, Charleswood Care Centre, and Golden Links Lodge for taking such good care of Champ over the last year and a half. Thank you especially to Noreen and Maureen for your kindness and special care in his final hours.
A celebration of Champ's life will be held at 11:00 a.m. on Monday, March 9, 2020, at Charleswood United Church, 4820 Roblin Blvd., Winnipeg.
In lieu of flowers, donations may be made to the Alzheimer Society of Manitoba or a charity of your choice.