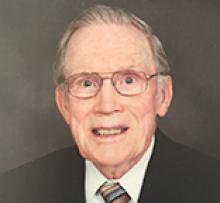 It is with sadness the family announces the passing of Harold Edgar Hughes on Friday, February 14, 2020, at the Poseidon Care Centre, at the age of 95 years.
Harold was predeceased by his wife of 64 years, Marjorie Hughes, in 2017.
Harold will be sadly missed by his sons, Alf (Keren), Phil (Christina), and Bill (Kim); grandchildren, Allan, Rick, Jessica (Ian), Devan, Alida and Claire; great-grandchildren, Kaylen, Sydney, Tabitha and Madeline; and great-great-grandson Maverick. He is also survived by his sister Florence; brother Gary; brother-in-law Ted Sayer; and sister-in-law Pat Hughes; along with many members of the Hughes families.
Harold was born in Winnipeg, Manitoba on September 19, 1924. Harold grew up in Transcona along with his six siblings. On March 21, 1953, Harold married the love of his life, Marjorie. He was a devoted husband, father and grandfather. He loved spending time with his family, especially the grandkids.
One of his proudest jobs was the 18 months he spent with the RCNVR during the Second World War, aboard the HMCS Lanark as an Artificer, and held the rank of Petty Officer. He never forgot his Navy beginnings. He remained a member of HMCS Chippewa up until he could no longer make the trip downtown. Harold's love of all things mechanical brought him to the Board of Grain Commission as a Mechanical Technician, where he worked until the age of 75. Harold's devotion to his community and neighbours can be seen in his many volunteer roles. This includes coaching hockey, caring for the Pirates Community Club, and his never ending support at the Transcona Memorial United Church. Harold could always be counted on whenever help was needed.
A celebration of Harold's life will be held on Saturday, March 14, 2020, at 10:30 a.m., at Transcona Memorial United Church, 209 Yale Avenue West, Winnipeg.
In lieu of flowers, donations may be made in Harold's memory to the Transcona Memorial United Church Building Fund.

The family requests that condolences and memories can be shared on Harold's memorial page by visiting Seasonsfunerals.ca