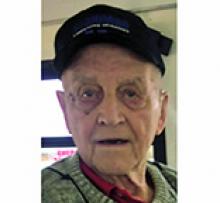 It is with great sadness that the family announces the passing of Joseph Barylski. He passed away peacefully at the Arborg Personal Care Home surrounded by love.
He will be missed greatly by his wife Louise; sons, Ronald (Alison), Jeffrey (Tracey); daughter Joanne Feakes (Rusty), and his grandchildren, Andrea, Cohen, Brenna, and Carter. He also leaves behind to mourn his brother Harold and his family Norman (Darlene), Laurie, Mark, and great- nieces and nephew, Brittany, Riley and Brody. Joe was predeceased by his sister-in-law Deanna and brother Peter.
Joe was born on the family farm in Okno, Manitoba. He grew up on the farm with his parents, Peter and Nettie, and his two brothers. Together they expanded the farm. As young boys they hunted and trapped, and at an early age became very important in the day to day operations on the farm. In May 1961 he married Louise Seidel. The three brothers went to the bush to cut wood to supplement the farm. Lucy and Deanna looked after the animals on the farm while they were gone. They later took to road construction and brush cutting all the while still running the family farm.
Anyone who talked to Joe knew how proud he was of the roads he built in the area. His first Cat was a TD14 and he loved to talk about it. He didn't want to tell you but he may have been the best operator in Manitoba!
Together Joe and Louise raised their family on the farm until they moved to town with the brothers in 1979. Joe continued to farm until a stroke took him away from the farm at the age of 87. His heart always remained on the farm.
Joe spent time at the Gimli Hospital where he received great care from all the nurses and physiotherapy staff. He lived in Stony Mountain for a few months where he received great care from the home care staff at the Stonewall Hospital. He later moved to the Arborg Personal Care Home.
The family would like to thank the wonderful staff at the Arborg Personal Care Home. They showed Joe much love and compassion especially in his final days.
A private family Celebration of Life will take place at the family farm in Okno at a later date.
In lieu of flowers, donations may be made in Joe's memory to the Arborg Community Cemetery, Box 713, Arborg, MB R0C 0A0.