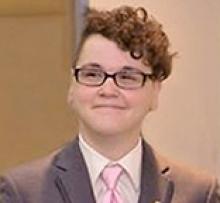 
It is with broken hearts that we announce the sudden passing of our darling Cole.
Left to cherish his memory are his parents, Alan and Cindy; sister and brother-in-law, Holly and Scott Hjartarson; and nephews, Beckett and Oaks. Also loving him are his numerous cousins, Doug, Bobby (Nancy, Tiffany, Marc, Jennie and their children), Chris (Gord, Liam and Syd), Kim (Gord), Deanna, Ryan (Chris, Elissa, Juicy), Stacey (Damien, Josh), David (Sue and Belles), Kelly-Girl, Cassie (Adrianna), Savannah, Noah, Paige and Nick, uncles and aunts, Ken and Gerri, Jacquie, Kathy and Derek, Alana and Mike, Jack and Erwin and grandparents, Bob and Eileen. Cole was predeceased by grandparents, John and Mary Thompson, Shaker Ediger, Pat Clark; Uncle Bill; aunts, Fay and Pat, and cousin Sandra. He also thought the world of his special friends, Lauren, Cordelia, Heather, Mik, Connor and Walker.
As a young boy, Cole was an avid sports enthusiast, loving nothing more than competing on his numerous soccer and hockey teams, first in St. Vital, then Whyte Ridge. By middle school, he discovered a new passion, and soon Cole and music were inseparable. The numerous music, band and drum teachers that he crossed paths with helped shape his talent and his personality. For that, we are grateful. He honed his skills while attending H.G.I. middle school, Vincent Massey Collegiate, Music Cellar, and Brandon University Jazz Program.
After university, Cole headed to Vancouver to continue his musical journey. Throughout the two and one-half years he lived there, he endeared himself to yet another music family, collaborating on several eclectic projects including jazz, rock, Balkan Brass Bands, an Amy Winehouse Tribute, Afrobeat, Hip Hop and producing others' music. He was very proud of spearheading the monthly Hip-Hopalypse, which continues to thrive.
Eleven months ago, we were thrilled to have Cole return home to Winnipeg to get to know his young nephews, becoming "Uncole", playing stick hockey with Bex and cuddling with Oaks. He relished rejoining family dinners, beating mom and dad at nightly card games, focussing on his health, and collaborating with his dad on writing and recording music. He enjoyed getting to know his new colleagues and clients at St. John's Music. These past months have been short, but oh so sweet. For that we are also so grateful.
Cole had been diagnosed with Type 1 diabetes just prior to his fifth birthday. Although this was a small part of the funny, creative, quirky, contemplative, goofy, competitive, loving person he was, the disease and its complications raised havoc on his spirit and body. In the end, it took him from us way sooner than anyone was ready for.

Cremation has already taken place and a service will be held at 2:00 p.m. at Thomson "In the Park" Funeral Home, 1291 McGillivray Boulevard on Wednesday, March 11, 2020.
Flowers gratefully declined. Should friends so desire, donations may be made to JDRF at 191 Lombard Avenue No. 1000, Winnipeg, MB R3B 0X1.