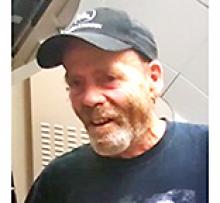 It is with profound sadness we announce, after an extremely courageous battle with cancer, Denton Page, aged 68, passed away quietly at home on March 6, 2020.
Born in Winnipeg, September 9, 1951, Denton went to Grant Park High where he played guitar in the band Haymarket Riot which lead to his greatest passion in life… music. For many years he played in bands touring across Canada and later as a Sound Technician travelling the U.S. After Denton married June 14, 1988, he and I moved to a small acreage around Gunton where he converted an old sheep barn into a recording and playing studio. For the past several years many friends have enjoyed playing and recording music there. Denton also taught guitar at the studio.
He also endured a lot over the years. He lost the majority of his eye sight to Retinitis Pigmentosa and seven years ago lost his fingers to frostbite.
Through all this Denton never lost his gentle ways, kindness and sense of humour, and he never gave up. He could no longer play his guitar but learned to play bass on the keyboard and continued to play with friends until recently.
Denton will be sorrowfully miss by his wife Karen; sisters, Gail, and Donna (Frank), and numerous nieces and nephews, great-nieces and nephews, his many friends and of course his furry family.
In accordance with Denton's wishes there will be no service, but a celebration of his life will take place at a later date.
Thanks to Kevin, Al, Kenny, Paul, Mel and Mark for their help in this difficult time. Denton loved you all like brothers.

PLAY ON MY LOVE PLAY ON