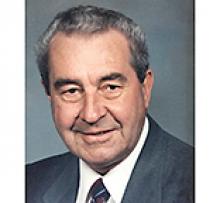 Family and friends of Vernon (Vern) McNair are saddened by his passing on March 11, 2020, at Grace Hospital, Winnipeg, at the age of 91.
Vern was born to Ernest McNair and Emily McNair (Coyne) on May 13, 1928, at Shoal Lake, Manitoba and was predeceased by his parents; and brother and sister, Murray McNair and Shirley McCann.
Vern married Marjory (Marj) Fleming on June 1, 1951. He will be lovingly remembered by his wife of 68 years. Three children were born to this union, Lillas (Rick), Douglas (Shanna) and Roy (Harj). Vern also leaves behind nephews and nieces, Sharon Clark (Kim), Robert McNair (Chaney), Brian McNair (Sonya), Ian McNair (Tracey), Bonnie Turk (Rick), Susan Paltiel (Jason), Sheila Lipinski (Rob), Brenda Fehr (Rick) and Joanne Fleming. Grandchildren, Scott (Kariane), Marie (Everett), Michael (Jill) and their father William Brown, and grandchildren, Emily, Alison and Alex, and Tanya, Janeen and Tyra are also left to mourn. There are five great-grandchildren, Lola, Lynmarie, William, Cedar and Given. Brother-in-law Harold Brown; and sister-in-law Joyce Fleming also mourn Vern's passing. Vern was predeceased by nephews Ken McCann (Bev) and Kelly Brown (Joanna).
Vern received his elementary schooling in a one room school house called Wolfe Creek. High school took place at Shoal Lake Collegiate before registering in the Faculty of Agriculture at the University of Manitoba. He graduated with a Bachelor of Science in Agriculture in 1951 and then took his first off farm employment as an Agricultural Representative, living in Carberry. He later joined CBC in Winnipeg as a farm broadcaster in both radio and television. This proved to be good training grounds as, at the time, television was in its infancy. Vern then joined the Manitoba Department of Agriculture and later took education leave to attend Indiana University earning a Masters Degree in Education (Communications). He returned to his role at the Department as Director of Agricultural Communications. This position proved most interesting involving modern communications and enjoyable fellow workers and was held for 30 years. Vern retired in 1989. The family lived on Crowson Bay in Fort Garry since 1955 where Vern took an active part in the community.
While Vern enjoyed his work immensely, he and Marj developed early a keenness for travel. Early traveling involved RVing which took them to every state in the United States and to all of Canada. Much of the early travel was with the children who, as they grew up, caught the travel bug. Later tripping involved tours and cruises which took Marj and Vern to many exotic places of the world. An even later activity involved 18 winters at a favourite RV park in Texas.
Along with a keen interest in travel, Vern had a lifetime interest in aviation, starting with building Battle of Britain aircraft models in 1940. While he never learned to fly, his interest took him to a record number of airshows and museums. His interest led him to considerable involvement in the early development of the Royal Western Canada Aviation Museum in Winnipeg.
Vern received many awards for his work in communications. This was highlighted in 2013 when he was honoured with membership in the Manitoba Agricultural Hall of Fame, a fitting honour to conclude a lifetime in agricultural communications.
The family thanks the caring staff at Grace Hospital.
There will be a gathering of friends and family at a later date followed by his burial in the family plot at the cemetery in Vern's hometown, Shoal Lake. Arrangements by Thomson in The Park Funeral Home.