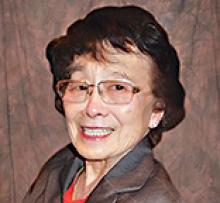 Misao Ikeda, beloved wife of the late Tsunetsugu Ikeda, of Calgary, AB, passed away peacefully on Tuesday, March 10, 2020, at the age of 94 years.
Misao was born in Haney, BC, on April 25, 1925. She moved to Winnipeg, MB in 1942 as part of the Japanese relocation during the Second World War. There she met and married Yutaka (Tucker) Tanabe in 1948. They were together in Winnipeg until his untimely death in 1964. Left on her own, she worked as a hairdresser to raise her two children. Thirteen years later, with her children now successful adults, she met and married Tsunetsuga (Ted) Ikeda. She moved to Toronto, ON where she and Ted lived for 33 happy years until his death in 2010. She then moved to Calgary, AB, where she spent her remaining years. Misao was active throughout her life, especially enjoying fishing, golf, bowling and dancing.
Misao is survived by her two children, Janet (Tom) and Blair (Ellen); three grandchildren, Amy (Steve), Travis (Lily), Vanessa (Derek); and five great-grandchildren, Dylan, Colby, Sienna, Kaiya and Kyla. She was predeceased by all of her nine siblings.
A memorial service will be held at a later date.

Condolences, memories and photos may be shared and viewed on Misao's obituary at www.McInnisandHolloway.com