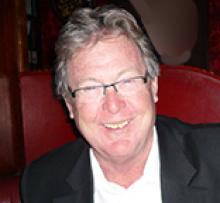 Drew was born in Winnipeg on June 6, 1948. He came into this world as Keith Gregory Scott but found his way to the Cringan clan. He was immediately adopted by Bob and Ellen Cringan. His family included big brother Bob and younger sister Barb.
Drew's last days were spent at the Victoria General Hospital surrounded by the people he loved most. The room was filled with comfort, laughter, compassion and a constant stream of his favourite music. He quietly slipped away the morning of March 14, 2020.
He will be mourned, and his memory cherished, by his wife of 49 years, Daphne, who stood by his side and fought his battles when he was no longer able to. Daphne was a pillar of strength for the entire family and a true example of love and integrity. Drew loved her fiercely and his telling her that he loved her every day, even as his Alzheimer's progressed, never stopped.
His love and support for his children was constant and he will be greatly missed by Jesse (Pyper), Laine (Todd), Nick (Colleen), and his delightful grandchildren, Rooney, Lux and Benjamin.
Drew loved life, he was so aware and curious. Some ways his friends have described him in these last few days include: A true legend, someone to be cherished, a memorable and vibrant character, a reckoned force, someone who made me smile, larger than life, open and generous, and full of life and love.
Drew had a real passion for music which started in the early days with his best friend Doug Mackenzie at the River Heights Community Club dances. He attended the Monterey Pop festival in 1967 where his real passion for music festivals took hold. This led to his involvement in the Children's Festival and Folk Festival, among others.
Drew was both politically and emotionally aware and made a lifelong commitment to his community. He was guided by his beliefs, consistently devoting his time and energy to numerous community boards and organizations.
He enjoyed countless adventures with his family too. From ski trips, to Disney World, to visiting his kids no matter where in the world they were living - as well as the frequent trips with Daphne that have created life-long memories.
But no matter where he ventured, his favourite place was the family cabin in Whytewold on Lake Winnipeg. He could often be found on the front deck, sitting in his favourite chair, looking out over the water, announcing out loud how fortunate he, and we, all were. He always felt like the luckiest man in the world.
The family would like to thank the staff at the Victoria General Hospital for their kindness, compassion and wonderful care. And we especially want to thank the CBI Health Group for giving Drew seven months of care and love. Especially Natasha, Belinda, and Paul/Marv.
After careful consideration regarding COVID-19 and in the interest of the community's health, we will postpone a Celebration of Life to a later date to be announced.
In lieu of flowers, donations to the Lake Winnipeg Foundation, Matlock Community Club or any cause you hold dear, would be greatly appreciated.