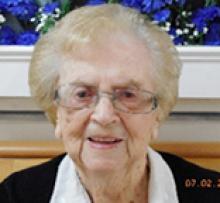 The passing of Mrs. James Nicholson (nee Grace Thibodeau) occurred on March 11 at Golden Door Geriatric Centre quietly at rest, reaching the age of 102 years, 5 months.
Born in Bathurst, New Brunswick, she was the daughter of the late Nicholas J. Thibodeau, a noted curler, and Josephine Choinard of Caraquet, New Brunswick. From a family of 11, Edgar (Collette Audet), Leo, Richard (Toots), Raymond (Loretta O'Connell), Thelma, (Sister Mary Lea), Dorothy Helena (Sister Mary Josephine) both Sisters of Charity, Mount St. Vincent Halifax, Stella (Bruno Hennessy), Leonard (died in the great flu epidemic at three years of age) and twins who died in infancy.
Grace was married to James Nicholson on June 2, 1947, until his passing on January 29, 1990. They had four children, Nancy (deceased), Louise (Lemoine) of Winnipeg, John of Toronto, Stephen, grandchild Melanie (Doucet) and great-grandchildren, Isaiah, Brayden, and Ares, and many nephews and nieces, never forgetting her beloved godchild Karen Thibodeau (Montreal).
Along with her family Grace had many affiliations among which were the Angel Society, St. Agnes Society, Children of Mary, and her much loved C.W.L. Sacred Heart Council Bathurst of which she was a faithful member from 1947 until her death. She taught catechism for four years, grades three to five, a secretary of the parish council for two terms, the secretary of the Ladies Aid, Hotel Dieu Hospital for a two year term. Her great love was music belonging to two choirs for 45 years with the Sacred Heart Cathedral and the Senior Choir singing at funerals in the Bathurst Diocese. Moving to Winnipeg in 1996, she joined the Stradbrook Senior Singers who performed twice yearly at seniors' complexes around the city of Winnipeg. Music and singing were the joys of her life.
"Amazing" Grace will live on in the many hearts that she touched, having lived a full life of caring and love.
Our special gratitude to all her caregivers at the Golden Door, especially "Portage Wing" who showed only love and tenderness to her throughout her time with them - she welcomed them into her loving heart.
A private memorial service will be held at Holy Rosary Church on River Avenue on Tuesday, March 24, 2020, at 5:00 p.m. Due to public health concerns at gatherings, a celebration of her life will follow present directives.
In lieu of flowers, kindest gestures in her memory may be sent as donations to the Golden Door Geriatric Centre or Holy Rosary Church.

For online condolences or to light
a memorial candle please log on to
www.mosaicfunerals.ca