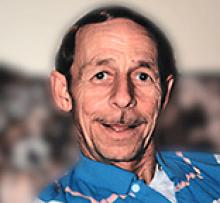 It is with great sadness, that we announce the passing of our father, grandpa,
great-grandpa, brother and uncle, Brian, on March 14, 2020.
Brian will be remembered by his son Glen (Gisele), daughter Diane (Randy) and daughter Karen (Paul); along with his grand-children, Brian (Jen), Jodie, Nikkole, Clay, Garrett, Cole, Brett and great-granddaughter Paisley.
Dad was born and raised in Wakopa,
Manitoba along with his nine brothers and two sisters. He moved from the family farm at 18 years of age and put down his roots in Winnipeg. Dad worked as a sales rep for
several years in the candy business, and then in the small wares industry. After retirement, he was the superintendent for an apartment block on Academy Road. A position he
enjoyed, while taking great pride in the
appearance of the building.
Dad became involved as a coach at St. Charles Community Club, where his children played hockey and baseball. He went on to
become the convenor of the St. James Assiniboia girls softball league for many years. He was an avid bowler, which
continued well into his retirement years. Only health issues could keep him from his
favourite pass time of competing on the lanes.
Dad was an avid sports fan. He loved his Winnipeg Blue Bombers, Winnipeg Jets and Toronto Blue Jays. He was also a true fan of his grandchildren, attending many games with his hat, his jets jacket, his bag chair and a pack of smokes.
Many thanks to all the staff at the Charleswood Long Term Care Centre, where dad resided for the past two years.
In lieu of flowers, donations may be made to a charity of your choice.
Interment will be Monday March 23 for
immediate family only. Because of Covid-19 we will schedule a service at a later date. Thank you to all for understanding at this
difficult time. We need to keep everyone safe.