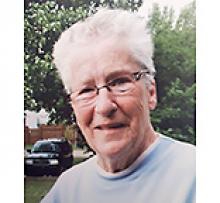 It is with great sadness, that the family of Doreen Draper announces her passing at Ste. Anne Hospital on March 20, 2020, at the age of 76 years.
Doreen is predeceased by her husband of 27 years, Fred, grandson Bradley, parents, Henry and Mary, father-in-law Percival, mother-in-law Ella, brothers-in-law, Gordon and Lorne, and sister-in-law Cynthia Draper.
In addition to many friends, Doreen is
remembered by her children, Nancy (Bernie Lussier), Barb (Rick Franks), and Bryce (Christine); grandchildren, Kendra, Kaitlin (Josh Rempel), Jeff (Brooklyn), Madison, Curtis, Mark, Alyssa and Brook.
She is also remembered by brothers, Bill (Kathy) and Donald (Valerie) and by sister-in-law Beth McLeod (Bob) and by many nieces and nephews.
As a girl, Doreen participated in and
enjoyed highland dancing. After her and Fred married, and bought the cottage at Nutimik Lake, that is where they loved to spend their time with their family and friends. Some of Doreen's hobbies included gardening,
puzzles, crafts, and bingo. She had a great deal of knowledge of the local birds, and was proud to have lived in the Springfield area
almost all of her life, most of it in the same yard.
During her earlier working years, Doreen was employed at Great West Life. Then, as
family came, she stayed home to raise their three children. In her later working years, she enjoyed her employment in several local businesses where she served as a cook.
The family would like to thank all of the wonderful homecare workers and nurses that cared for Doreen, the doctors and nurses at Ste. Anne Hospital, and Holly and Sheryl of Seasons Funeral Service.
As per Doreen's wishes, cremation has
taken place. There will be a Celebration of Life at a date to be determined.
The family requests that memories and condolences can be left by visiting Doreen's memorial page at seasonsfunerals.ca