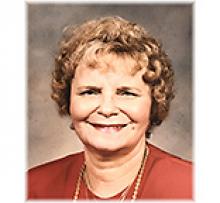 The family of Rose Jean Onofrey announce her peaceful passing on Friday, March 20, 2020, at the age of 93.
She was predeceased by her sons, Gerald and Dennis Onofrey, parents, Anton and Mary Kaskiw, brothers, Jack, Frank and Stan Kaskiw, and daughter-in-law Darlene Onofrey. She leaves to mourn her daughter-in-law Paula, grandchildren, Corey Onofrey (Jai) and Beckie Williams (Ben), five great-grandchildren, Lucy, Thomas, Ella, Esme and Emmett, brothers, Edward (Marian) and Melvin (Maria), sister Shirley Slobodian (Joe), sisters-in-law, Mary Kaskiw and Nellie Kaskiw, as well as numerous nieces and nephews.
Rose was born in the area of Shoal Lake, MB. Never a small town girl, when she completed her education she moved to Winnipeg. Rose was a very private person. Her number one focus in life was caring for her sons. Once they started school she joined the workforce at James Richardson & Sons as a secretary in the Pioneer Grain division. She was extremely proud to work for Pioneer Grain where she remained until her retirement at age 65.
Rose was tremendously proud when her son Dennis became an R.C.M.P. officer. Her greatest fear came to fruition when he was taken away while on duty at the young age of 27. Her saving grace was her daughter-in-law Paula and her two grandchildren. Although they were miles apart, she loved them dearly. Her free time was then devoted to her son Gerry and daughter-in-law Darlene until their passing.
Rose was a devout Catholic and a parishioner of St. Mary's Cathedral for over 70 years. Never did she miss attending mass. She also was involved with the Catholic Women's League for many years.
The family would like to extend their gratitude to the nurturing staff at Charleswood Care Centre where she was cared for in her final days.
Due to current global health concerns a private service and mass for immediate family will be held. A Celebration of Life gathering will take place at a later date.