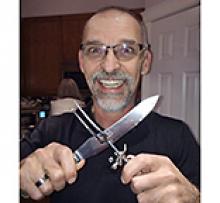 
Leo left this world far too soon on March 17, 2020, at the age of 63.
Leo was a man of few words, unless he was talking about his beloved dog Sasha or golf. When he loved someone, it showed and while it may have taken him three tries, he married Jess, the love of his life and partner on the golf course, on August 16, 2008.
Leo had many things in his life that he was proud of: his hole in one, the year he won the club championship at Inwood Golf & Country Club, but nothing made him prouder than his three daughters and his grandchildren. Leo (aka Grumps) loved spending time with his grandchildren, Kelton, Madie, Zenon, Luc, Emery, Ellet and Logan; they were his biggest joy and he was their biggest fan. Watching his grandchildren's activities was probably the only time that he wasn't talking about his dog Sasha or golf.
Leo put 100% of himself into everything he did. Whether it was coaching his kid's activities, playing golf, flying to Edmonton to be with his brother Bert during the transplant or in his work at Kal Tire; he was well known for his integrity and work ethic. He was a good man and he made the best pancakes. Life will look very different without him.....

"I was down, but now I'm flying
Straight across the great divide
I know you're crying, but I'll stop you crying When I see you, I'll see you on the other side"

Once it is safe to do so, a Celebration of Life will be held in Leo's honour.