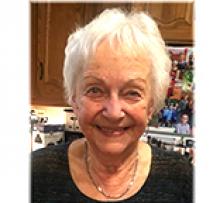 It is with deep sadness we announce the passing of our much loved wife, mother, grandmother and great-grandmother. Helen was born in The Pas, Manitoba on December 21, 1934, and passed away peacefully on March 21, 2020, in Dauphin, Manitoba.
Helen and first husband, Vern, met and married in The Pas where their three children were born. They both worked for the C.N.R. until their move to Dauphin, Manitoba in 1969. They ran several businesses together, both in The Pas and Dauphin.
Helen was very involved in the community. Her claim to fame was being crowned The Pas Trappers Festival Queen in 1955. Helen loved her involvement in the curling community and was inducted as an Honorary Life Member of both the Kilty Kurling Klub and Manitoba Curling Association. Helen's hobbies included sewing, knitting, crocheting and many hours learning the latest in computer gadgets and technologies. She was well connected!
Helen and Vern enjoyed 48 years of marriage and were enjoying retirement when Vern passed after a short battle with cancer (June, 2004).
She found a loving companion in Don McDill whom she married in October, 2007. She always wanted to be part of a large family and she got that when she married Don. They enjoyed many winters together in Texas. Don took very good care of her in her final years as she struggled with her health.
Helen will be lovingly remembered and missed by her husband Don McDill, her two daughters, Bev (Cal) Chute and Donna (Rick) Olsen, her son Bob (Suzanne) Alm, six grandchildren, Brad (Jenna) Chute, Jeff (Kim) Chute, Jamie (Laura) Olsen, Lyndi Olsen, Brenden Alm and Kylin Alm, two great-grandchildren, Owen Chute and Avery Chute, four stepchildren, Laurie (Wayne) Church, Cathy Yakubchak, Karen (Kirk) Dawson and Rob McDill (Laurie), stepdaughter-in-law Laureen McDill, 14 stepgrandchildren, 16 step-great-grandchildren, Helen's three sisters-in-law, Margaret, Violet and Betty Alm, nieces and nephews and their children and grandchildren, and her many friends.
Helen was predeceased by her parents, Harry and Katherine (Hrab) Chapelsky, her loving husband Vern, her only brother Steve, her five brothers-in-law, Andrew, Olaf, Rudy, Robert and Albert Alm, her sister-in-law Linda Alm, her nephew Mark Alm, and her stepsons, Jeff and John McDill.
Flowers are gratefully declined. Should friends so desire, donations in memory of Helen may be made to Dauphin Regional Health Centre, Heart & Stroke Foundation of Manitoba or CancerCare Manitoba.
The family would like to sincerely thank all the health care workers who cared for her so well.
According to Helen's wishes, a private family interment will take place at a later date.