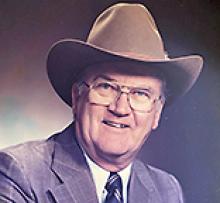 
On a beautiful Spring day Bruce left us unexpectedly.
He is survived by his wife and love of his life for 65 years, Royce, his children, Hugh (Cindy), Chrissie (Hugh MacInnes), Ian (Jacquie), Catherine (Mike), and his grandchildren, Klay (Chelsey), Bailey (Kolton), Tyler (Jill Harnett), Sarah, Alexandra, Jayden (Joel), Cassandra, Laurel, Christine MacInnes (Brandon Douglas) and Emily MacInnes. He is also survived by eight great-grandchildren, Mekenna and Camryn Boice, Kayden and Camryn Whyte, Tor and Cadele Locken, Abigail and Emelia Douglas and was excited to learn of a new great-grandson due in June. Also surviving Bruce are his sister Audrey, sisters and brothers-in-law, many nieces, nephews and cousins.
Bruce was predeceased by his parents, Clifford and Clara, sisters, Opal and Barbara, and his brother Carson.
Bruce was born and raised in Winnipeg, Manitoba and graduated from the University of Manitoba Faculty of Agriculture. Royce and Bruce lived in Moose Jaw, Regina, Winnipeg and settled in Kamloops, BC in 1972 where he managed the BC Livestock Co-op, was deeply involved in the beef cattle industry and finished up his career as a cattle buyer.
Always active, Bruce was an avid walker and gardener and curled until this past year. Summers were spent at their beloved property on Shuswap Lake. He was community-minded and a great neighbour. He spearheaded the development and operation of the Cattle Drive of the 1990s, and was deeply involved in developing and growing the Juniper Ridge Community Association. He was affectionately known as the Plum Man due to the popularity of his plum trees on Qu'Appelle Boulevard with passing school kids, walkers and neighbours.
We are so thankful to have had many years of love, fun and laughter with Bruce, he will be deeply missed.
The family would like to thank Dr. Bantock, BC Ambulance, the doctors and nurses at RIH and the staff at Chartwell Ridgepoint.

Until we meet again.

A Celebration of Life will be held in the future when we are able to gather together.

Condolences may be expressed at www.schoeningfuneralservice.com