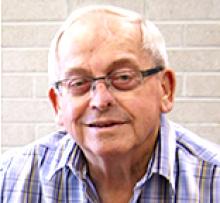 It is with great sadness that we announce the sudden passing of Peter on Thursday, February 27, 2020, at the age of 81 years.
Peter will be lovingly remembered by his children, Derek (Margaret), Laura Opitz (Grant), Vernon and Sheldon (Darlene); grandchildren, Carson, Mikayla, Regina, Danton, Denim and Porter; friend Dorothy Steffan, sister Eleanor Karalash, sisters-in-law, Lucille Rybuck, Dorothy Warwaruk, Marion Warwaruk and Jean Warwaruk, and brother-in-law Julian Warwaruk; many nieces, nephews, cousins and friends.
Peter was predeceased by his wife Linda (2012), daughter Colleen Marie (1971), parents. John and Mary Rybuck, in-laws, Peter and Katherine Warwaruk, brother Maurice, and brothers-in-law, Joe, Lawrence, Paul and Roman.
Peter was born on February 8, 1939, in Vita, MB and lived on the family farm in Senkiw, MB. Peter attended Senkiw School, a one room school house, for grades one through eight, then completed grade nine through correspondence before moving to Dominion City and renting a two room house in order to attend high school. After grade 12, Peter moved to Winnipeg and graduated from Manitoba Teachers' College in June of 1958. Peter's teaching career began in a one room school house in Chatfield, MB, before transferring to Winnipeg School Division #1 where he taught at Dufferin, Florence Nightingale, Andrew Mynarski, and Shaughnessy Park before retiring in 1996, after 35 years. During his teaching career, Peter continued to attend the University of Manitoba to complete his university degrees majoring in Geography and School Administration, with minors in English and Russian. Peter also ran a successful tax business for 30 years.
Peter met Linda in 1965 and they were married in Erickson, MB on Canada Day, July 1, 1967. The birth of their children kept them busy and sparked a love of travel. Cross country driving trips began when the kids were small and Peter continued his love of driving adventures through the summer of 2019. Canada is a large country with much to explore and Peter enjoyed the rich history and culture while teaching his children through experience. Peter had much love for family and friends and took great care to visit as many as possible no matter the direction he was headed. His love of travel extended to Europe, USA, and eventually to Mexico and Cuba.
Throughout his life Peter had a deep love of baseball, beginning his career with the Senkiw home team and then with the Chatfield Cardinals, for which he was inducted into the Manitoba Baseball Hall of Fame in 2003. His involvement in social clubs was not limited to baseball as he also held positions with the Winnipeg Teacher's Association, St. Theresa's Parish, and the Knights of Columbus where Peter's faith shone as an integral part of his life. He enjoyed Friday night dinners and card games with "the gang", Friday morning breakfast club, the coffee crew at Tim's, and he loved to kick up his heels at old time dances across Manitoba.
The family would like to thank you for your love, patience, and understanding during this difficult time. A private, family service was held on March 26, 2020, and Peter is interred next to Linda's side at Glen Eden Memorial Gardens, 4477 Main St., West St. Paul, MB. Due to the uncertain circumstances surrounding COVID-19, a Celebration of Life will be held in the future when it is safe for everyone to attend.
In lieu of flowers, donations may be made in memory to the Manitoba Baseball Hall of Fame, 111C Gilmour St., Morden, Manitoba R6M 1N9, mbbbhof@mts.net, or a charity of your choice.