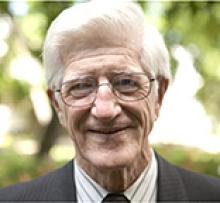 Herbert Henry Rempel, a resident of Heritage Life Personal Care Home in Niverville, Manitoba, formerly of Winnipeg, went home to be with his Lord on March 16, 2020, at the age of 86 years.
He will be sadly missed and lovingly remembered by his four children, Brian, Karen (David), Darlene (Bruce) and Cyndi (James); his brother Ed; numerous in-laws; nine grandchildren; nine great-grandchildren; and many nieces and nephews.
Herbert was born September 1, 1933, to Gerhard and Maria Rempel (nee Warkentin). Herb grew up in a close-knit family in the Fork River area. He received his education at Fork River School and helped on the family farm until he moved to Winnipeg, where he took a job at Safeway managing in the produce department.
This is where he romanced his co-worker Ramona Kirschman, marrying her on December 29, 1956. They celebrated 50 years of marriage in early 2006 before Ramona went home to be with her Lord and Saviour.
After starting a family, Herb worked his way up the ranks of the Manitoba Telephone System working there for 35 years until retirement in 1991. Outside of work, Herb's family and church were his greatest priorities. Together Herb and Ramona shared a love for their Lord leading College and Careers groups, teaching Sunday school, singing in the church choir, entertaining and billeting numerous pastors, missionaries and visitors from their church. Herb had a beautiful tenor voice and it is a poignant memory the many times he and his girls sang in harmony around the piano at home. Herb particularly loved the old hymns and their marvellous messages.
Herb often served others with his time, his abilities, his fix-it nature, and his generous personality. Herb and Ramona grew a wonderful garden and often shared the delicious produce with family and friends. They loved camping with family, camping mostly locally, but with trips west and then to the east coast of Canada. Eventually they made further travels staying in Florida, Texas, Arizona, even Alaska, but Texas was one of their favourite spots returning year after year. Another yearly adventure was picking blueberries, saskatoons, even high bush cranberries. Often there were competitions to see who could pick the most in the shortest time. Great family memories!
Herb could often be found tinkering in the garage, fixing something for someone, or repairing something at church. Herb spent a lot of time with people and forged many lasting friendships. He had the "Rempel" smile, and an infectious laugh.
After the passing of his beloved wife, Herb and his brother, Ed, started on adventures that initially took them camping in Texas. With the help of Ed's son, Al, they travelled the likes of Thailand, Vietnam, Laos, Bangkok and the Philippines. A deep bond formed for these brothers and they became roommates, travel companions, and walking buddies. We are thankful to Ed's family for including Herb in many family activities.
Herb was predeceased by his wife; parents; two brothers in infancy; brothers, Jake, Pete, George and John; sister Mary; daughter-in-law Anne; and one grandchild Kate.
Due to the COVID-19 virus and restrictions, funeral services cannot be held at this time. Plans for a Celebration of Life will take place at a later date.
Donations in Herb's memory can be made to Finding Freedom (info@findingfreedom.ca) or Compassion Canada.