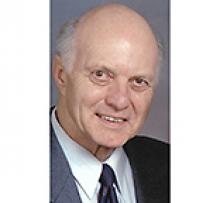 Barb and Cheri Holman are saddened to announce that our father, David Holman, died of advanced dementia on Tuesday, March 3, 2020.
Dave was predeceased by his wife Patricia K. Holman (Trish) on May 12, 2019. Dave was born on March 25, 1933 in Winnipeg, Manitoba to George and Ruth Holman and was middle brother to Ted (deceased) and Allison (surviving). Dave met Trish Malaher outside Kelvin High School, following their last exam in June 1950, in the wake of the May flood of the Red River. As a youth, he was an Eagle Boy Scout and with his brother Ted, ran two Wolf Cub Packs. Dave's Rover Crew helped with maintenance at Caddy Lake Girl Guide Camp. Dave attended the Coronation of Queen Elizabeth in 1953 as a representative of Boy's Parliament, and served in leadership roles with the Young People's Union and the Order of the Black Square at St. Andrews United Church. At University of Manitoba, he completed Chartered Accountancy, joined Phi Delta Theta. Dave and Trish were married on July 14, 1956. Dave helped build the family cottage at West Hawk Lake, Manitoba, a beloved gathering spot enjoyed by the extended Malaher-Holman families. Dave played the piano and accordion by ear, took evening classes in music appreciation, attended drama presentations, and enjoyed badminton and cross-country skiing. Dave co-founded mixed adult social volleyball groups, starting in Winnipeg and continued in Toronto when they moved there in 1969. Dave worked as a Chartered Accountant in various companies in Manitoba and Ontario, including Roy-L Capital, from which he retired in 1998 at age 65. He volunteered for Trillium Mississauga Hospital Heart Floor for nine years, served in financial roles for 30 years at Islington United Church, and was auditor for the church and community groups in Islington (Day Club, Rate Payers and Kiwanis). Together with Trish, Dave received an Exceptional Neighbour Award from City of Toronto in 2007. Dave was a loving, caring, thoughtful and conscientious son, brother, husband, father, grandfather, granduncle, and friend. He retained his gentle, quiet and happy nature to the end.
Given Covid-19, regrettably we cannot confirm dates for the Celebration of Life in Toronto, or the interment in Winnipeg. We will publish an update when we know. Instead of flowers, please consider a donation to a charity of your choice or: Sleeping Children Around the World; Scouts Canada; South West Whiteshell Fire Department.

You may express your condolences online at
www.turnerporter.ca./memorials