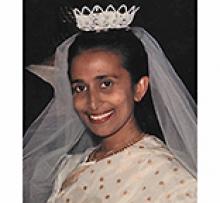 On March 20, 2020, after a long battle with cancer, Shirin was called home to be with her Lord and Saviour.
Shirin grew up in India. She is the youngest of six children. Shirin was predeceased by her parents, John and Catherine, her sisters, Rose and Leti, and brothers, Patrick and Freddy.
Shirin and her husband Eduard met in Chicago while both studying and completing their Phd's. They settled in Winnipeg making it their home. They worked as professors in psychology at the University of Manitoba. As time progressed they were blessed with a daughter, Anjali, on their 10th wedding anniversary. A son, Michael, followed nearly three years later. Balancing family life and a full-time career was challenging, yet thanks to Ruby (Shirin's surviving sister) both Shirin and Eduard were able to do this. There were many family vacations taken in Vancouver during the winters, as well as time exploring other provinces. Shirin enjoyed flower gardens and museums on these trips. As time grew closer to retirement, Shirin was blessed with four grandsons, Andrew, Anthony, Ian and Stephan.
Shirin spent the last four years of her life at the Convalescent Home of Winnipeg. We would like to thank the staff for all the love and care these years.
Shirin is survived by her husband Eduard; sister Ruby; daughter Anjali (Mark), grandsons, Andrew, Anthony and Ian; son Michael, grandson Stephan; nephew Bushan (Esther), and many nieces and nephews in India.
A private family interment has been held at Glen Lawn Memorial Gardens. Memorial service to occur later in 2020.
In lieu of flowers, donations to be made to CancerCare Manitoba