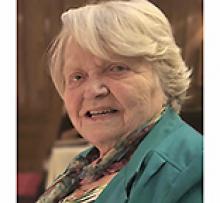 It is with great sadness that the family announces the peaceful passing of their beloved mother and Oma, Anna Janzen, on Friday, March 20, 2020, at Grace Hospital.
Anna will be dearly missed and lovingly remembered by her son Willy (Karren) Janzen, and their children, Christopher (Krista), Daniel and Julie. Anna is survived by her brother, Willy (Betty), sisters, Mary, Louise (Vic) and Betty, sisters-in-law, Lydia Frischbutter and Leslie Frischbutter, and by loving in-laws, nieces and nephews, as well as many friends and relatives.
Anna was predeceased by her loving husband Isaak, her brothers, Henry, John, Fred, and brother in law Karl-Heinz Didzun.
Anna was born on September 16, 1936, in Steinfeld, Ukraine. In 1943, due to war and poverty, Anna and her family immigrated to Germany. In 1947 her family moved to Chaco, Paraguay. There her family settled in the Colony Neuland in Einlage where Anna helped her mom look after her seven siblings. In 1958, Anna and her family came to Winnipeg. Anna first met the love of her life, Isaak in Paraguay. They met again in Winnipeg and were married. Anna worked for Paulin Chambers shortly after she arrived in Winnipeg until she retired. Anna loved getting together with family and friends. Anna enjoyed doing things with her husband including tending to the garden, trips to Hawaii, Mexico and British Columbia. Anna was baptized in Paraguay upon the confession of her faith and later transferred her membership to North Kildonan Mennonite Brethren Church.
A private family service and interment will take place followed by a Celebration of Life to be announced at a later date.
We would like to thank the staff at Donwood Manor Personal Care Home for their care.
In lieu of flowers, those so wishing may make donations to Donwood Manor Foundation, 171 Donwood Dr., Winnipeg, MB R2G 2X2 or Mennonite Central Committee, 134 Plaza Dr., Winnipeg, MB R3T 5K9.