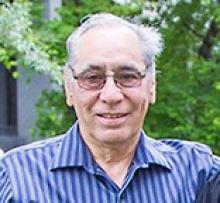 It is with great sadness we, the family of Conrad Kirkness, announce his passing on March 26, 2020 at the Health Sciences Centre in Winnipeg MB.
Survived by his daughter Rhonda Kirkness; grandsons, Jonathan, Jonah and Isaiah Garson; siblings, Bob Spence, Dale Spence, June (Bruce) Montour, Jeff (Terina) Spence and Tim (Dawn) Spence; many nieces, nephews, relatives and friends.
Conrad was predeceased by his wife Geraldine Kirkness; his mother Verna Spence; father-in-law Jimmy (James) Govereau and his grandparents who raised him, Miles and Sarah Kirkness.
Born on February 11, 1952, Conrad resided on the Fisher River Cree Nation and was a miner for close to 30 years working at various mines throughout Canada; Thompson, Bissett, Ontario, Saskatchewan, British Columbia, NWT and the Yukon. During his many months away working in the mines, he made many lifelong buddies. He grew up next door to his "other brothers," Stuart, Marshall and Benjo Cochrane, and they often went mining together. Conrad had many friends and close buddies in Fisher River and all over the place.
Active Pallbearers - Myles Spence, Kyle Spence, Tristan Kirkness, Cameron Kirkness, Farrell Favell and Garnet Favell.
Honorary Mining Pallbearers - Stewart Cochrane, Ben Cochrane Jr., Leonard Bowman, Johnny Bjorson, Harold LaForte, the late Marshall Cochrane and Morton Sinclair and all his mining buddies from across Canada.
Honorary Pallbearers, close buddies – Winston Murdock, Lawson Kirkness, David Kirkness, Larry Karatchuk, Archie Cochrane, Lorne Cochrane, Jeff Cochrane, Mike Whiteway, Russell Mallette, Robert Murdock and Bob Crate.
Funeral service will be Tuesday, March 31, 2020 at the Fisher River United Church at 2:00 p.m.
Due to circumstances concerning Covid-19, there will be a limited amount of seating for immediate family. Conrad will be laid to rest near the Kirkness family plot at the Fisher River United Church.
A Celebration of Life service will be planned at a later date.
The family would like to thank the doctors and nurses of Ward GA4 at the Winnipeg Health Sciences Centre, the staff at CancerCare, as well as David and Terri Kirkness for their loving support during Conrad's illness.
In lieu of flowers, please make donation to CancerCare Manitoba.

For Dad
"The most precious and important thing to come out of any mine…. is the miner!"
A man stood outside the pearly gates,
His head was bent and low,
He meekly asked the man of fate
the way that he should go,
What have you done? St. Peter said
to gain admittance here,
I have been a miner he replied
for many, many years…
Each day I descended into the mining hole…
To earn my living digging
and blasting the earth below…
I always prayed and prayed to the heavens above…that I would return to those I loved.
If somehow death I should meet…
I want to awake at Jesus's feet…
I want my loved ones to rest assured
that in his arms I am secure.