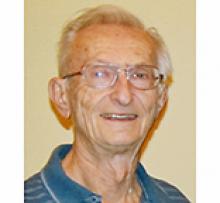 It is with deep sadness that we share the loss of Ralph Stanley Trombo.
Ralph was born in Brokenhead, Manitoba and was predeceased by his parents, Stanley and Mary Trombo. Ralph will be lovingly remembered by his wife Joan, of 59 years, daughters, Angela (Bruce) and Pamela, son Ryan, and granddaughters, Emily (Wyatt) and Britni (Elliott).
Ralph's career in teaching started as a Permit Teacher in Hoey West. He completed Normal School, Bachelor of Education and Bachelor of Arts at the University of Manitoba. His teaching career continued in Tyndall and in 1956 he accepted a teaching position in Teulon. In 1959 he became Principal of Teulon Elementary School until he retired in 1990.
Ralph spent his time volunteering in the community and sat on many executive committees' as well as being a director. His volunteered time was devoted to the Teulon hockey and baseball clubs, Teulon District Agricultural Society and Museum, Teulon Chamber of Commerce, Interlake Teachers, Retired Teachers' Association and Manitoba Permit Teachers' Association, Teulon United Church Board and Trustee, Green Acres Park Board and a 4-H leader. He was awarded the Honorary Life Member from the Kinsmen Club of Teulon in 1981.
Ralph's gift was playing music by ear and writing songs for special occasions. His dream came true when he helped organize and played with Willy and the Boys Band and the Goldenaires for senior residences and dances.
Ralph's joy was spent, spending time with his family, relatives and friends. Ralph and Joan travelled extensively and decorated their Christmas tree with ornaments from their trips. Ralph's greatest pride was attending activities that his children and grandchildren participated in.
Ralph's friendships that he made over the years were long lasting and he treasured each and every one. Ralph's love for nature was indicated by the many bird feeders that he kept full. He had a great sense of humour and wit. Ralph lived his life's dash to the fullest with adventures and journeys and our lives were a better place with him in it.
Our family would like to thank Dr. Graham, Stonewall and Eriksdale Hospital staff and MacKenzie's Funeral Services.
Due to COVID-19 a private immediate family service will take place on April 1, 2020.
In lieu of flowers, donations can be made to Teulon and District Museum, Box 44, Teulon, Manitoba R0C 3B0, or Teulon Food Bank, Box 13, Teulon, Manitoba R0C 3B0.
Celebration of Ralph's life will be held at a later date.