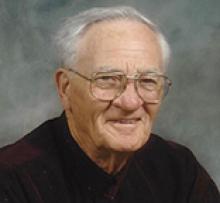 With sadness, we announce the passing of Richard Mellor, aged 95 years, at the Grace Hospital on March 16, 2020.
Richard is lovingly remembered and sadly missed by his wife, Margaret; son, Wayne (Kim); stepdaughters, Sharon (David) and Betty Lou; daughter-in-law, Shireen; his grandson, Christopher; stepgrandchildren, Matt (Rachel), Greg (Erika), Ben, Melissa and Carmen (Rod); and six great-grandchildren.
Richard was predeceased by his sons, Craig and Frederick; his brothers, John, Cyril and Tom; and his sister, Mabel.
Richard was born and raised in Kipling, Saskatchewan. He served in the Canadian Armed Forces during the Second World War. Most of Richard's working career was as a field auditor with Manitoba Hydro, through which he travelled to almost all communities across the province. He enjoyed a long and happy retirement; his favourite pastimes were golfing and dancing.
He was a member of the Royal Canadian Legion, Brandon Branch. Also, he was a life member of the Birtle Lions Club, and received the Lion's Melvin Jones Fellow award for dedicated humanitarian services.
Richard will be forever in our hearts and will be greatly missed by his family and friends.
A service to celebrate his life will be held at a later date.

Remembrances and condolences can be
shared with the family at
www.braendlebrucefs.ca