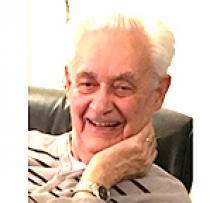 
Robert Norris Clarkson (Bob), born December 27, 1928, passed away peacefully on March 27, 2020.
Predeceased by his parents, William and Lida (Anderson); wife Verna and one brother William. He is survived by three sisters, Alma, Betty and Donna; his five children, Diane (Kevin), John (Debra), Don (Cindy), Marion (Chris) and James (Anna Maria); his grandchildren, Brian, Eileen, Neil, Sharon, Karla, Heather, Iris, Jack, Helen and Crescenzo and his great-grandchildren, Aria, Zephyr, Benjamin and James.
A son, brother, husband, father, father-in-law, grandfather and great-grandfather, who made a difference in the lives of all who knew him and many who did not.
Although he was a person of high intelligence, the aftermath of the Great Depression prevented him from pursuing higher education. Instead, he entered the banking business in Grenfell, Saskatchewan upon high school graduation. His banking career eventually took him to Winnipeg, where he met Verna, the love of his life. Eventually, he found his true calling in the public service of Manitoba, in a variety of roles.
His greatest contribution in public service was affordable housing. He was the first comptroller and later the general manager of the Manitoba Housing and Renewal Corporation and he served as Assistant Deputy Minister of Municipal Affairs. Then, after he retired (at age 80) he helped convert St. Matthews Church into an affordable housing co-op.
He made other significant contributions to public service as well. He supported reconciliation by helping to secure the Northern Flood Agreement between the provincial government, the federal government and 17 band councils. At one point, the federal government said they needed more time to study the issue, and he told them that that they had had over 100 years to study the issue and it was now time for them to act. He helped to create a more equitable property tax system through his work in 1979 on the Manitoba Property Assessment Review Committee, the last serious look at property taxes that initiated the practice of using market assessed value. He helped to protect Manitoba's water by representing both Canada and Manitoba on the Garrison Diversion Project negotiations.
For over 70 years, he was an active member of St. Matthews Anglican Church in Winnipeg serving on vestry, as warden, as Treasurer (until December 2019) and was always there to greet people and make them feel at home. He was also heavily involved in the Diocese of Rupert's Land, the Anglican Church at the national level and received the Order of Rupert's Land in 2004. No matter what he did, he did it with passion, professionalism and always made a difference in peoples' lives. He helped set up the community kitchen and garden at St. Matthews, and was an ardent supporter and fundraiser for refugees.
Bob was also an active member of the community and served for a time, as treasurer at the River Heights Community Centre, helping to get the "new" building constructed in the 1960s and was also active in Wildwood Seniors curling and golf.
He had many friends with whom he gathered regularly to share stories, laugh and enjoy each other's company. As with all people he touched, they know that they were better for his presence. More importantly, he was a devoted family man. He always had time to listen and enjoyed having everyone around him. When his wife Verna died suddenly in 1981, he became a single parent. He took over the tradition of hosting Sunday dinners, often involving over 20 people as our families expanded. Most important, his family and friends had a shining example of what human beings could be at their best.
His life was one of servitude and an inspiration to all of us. Cheers, Bob.
In lieu of flowers, donations to St. Matthew's Anglican Church, Winnipeg or a charity of your choice in the name of Robert Clarkson would be appreciated. All donations will be gratefully acknowledged.