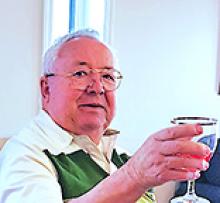 It is with heavy hearts and deep sorrow that we announce the passing of our beloved husband, father, grandfather, great-grandfather, uncle, and brother-in-law, Karl Iwanoczko, after a valiant battle with an aggressive cancer, just weeks before his 90th birthday.
Karl is survived by his wife of almost 70 years, Marion "Pinky" (nee Kazuk); his son Glen (wife Karen Sue), granddaughter Caitlin Stakhura (husband Vlad), and great-granddaughters, Emilia, Camille and Delilah, stepgrandsons, Matt and Mark; his daughter Shannon Coughlin (husband Les), grandson Blaine Coughlin (wife Vanessa Nowostawski); sisters-in-law, Linda Kitchen (Jim) and Gail Kazuk, as well as many nieces and nephews on both the Iwanoczko and Kazuk sides.
Karl was predeceased by his father John Iwanoczko and mother Sophie Dubel Iwanoczko Russell, his sister Marie Flanagan, brother-in-law Bill, his brother Michael "Shorty", sister-in-law MaryLou; and brother Leo "Butch", sister-in-law Gloria; and many Kazuk brothers and sisters-in-law.
Dad was born in Winnipeg, but as his father was a CNR section foreman the family lived in small railway villages, mainly White and Elma, MB. He and Mom were childhood sweethearts and were married in 1950, first living in Elma, MB as Dad developed his career as an Operator/Agent for CNR. In the following years their children, Glen and Shannon, were born. The family followed Dad's work to other locations, finally arriving in the job as Station Agent in Redditt, ON, which was to be home base for many years, where lifelong friends and so many memories were made. Dad's love of fishing led to his Valhalla, the fishing camp in Brinka, where he and the family and extended family made many wonderful memories. When Redditt closed in 1975, Mom and Dad moved to their final home base in Winnipeg where again many friends and memories were made.
Dad loved curling, hunting, fishing and sports, participating and coaching in many cases. He was the epitome of the adage "He who gives of himself, gives the greatest gift of all" as Dad and Mom by his side worked tirelessly for community clubs, the Legion, community activities, seniors groups, helping people with whatever need they had. And he had fabulous vegetable and flower gardens for years! Dad was a family man, adoring and caring for his parents, close to siblings, and to the extended Iwanoczko / Kazuk families. He was a pillar of strength and support to his children, grandchildren and great-grandchildren - always there to help us in any way. We will miss him every minute of every day.

Interment and Celebration of Life to take place at a later date.