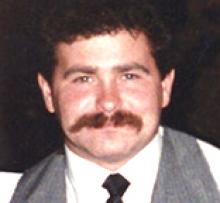 With heavy hearts, we announce that Rick Jenken passed away at the age of 59 years after a short battle with liver cancer.
Rick was predeceased by his parents, Nellie and Ted Jenken; and is survived by his sons, Justin and Kelsey; and daughter, Carly. He also leaves behind his siblings, Marg Crossman (Al), Fran Delannoy (Ben), Bill (Shirley), Dave (Kim), Lori Jones (Rick), and Daryl, and numerous nieces and nephews.
Rick grew up in Norwood Flats and had many friends. After graduating from Nelson Mac, he worked for CN as a carman at Transcona Shops. Then he went on to work at Community Cycle in St. Vital. Later he owned and operated his own bike shop, JMJ Cycle. Rick was very mechanically inclined and could fix anything, whether it was bikes, cars, boats, small engines, and/or carpentry.
Growing up, he played hockey with the Norwood Falcons, the St. Boniface Saints AAA, St. Boniface Riels, and the St. Vital Vics. He also played fast pitch with the St. Boniface Blues. Rick was a weightlifter, and enjoyed teaching others to box. He also loved boating and fishing, camping, and many bonfires with his family and friends, including his mom, his nieces Sandy and Arlene, nephew Jamie, and his brother and best friend, Daryl.
At age 42, he attended Assiniboine Community College and graduated with distinction, obtaining his diploma as a Licensed Practical Nurse, an accomplishment he was very proud of. Rick was a very well liked, competent, and compassionate nurse however, was unable to continue in his profession due to health issues.
Rick had a tough exterior and at times let it be known, but if you were his friend, he would go above and beyond to help you. He was well liked by many and had a heart of gold. He will always be in our thoughts, our hearts, and our prayers.

Rest in peace our beloved dad,
brother, uncle and friend.

There is no service at this time. A Celebration of Life will be held when possible.
Friends and relatives are encouraged to share in a photo tribute, stories and condolences for the family by visiting Richard's memorial page at IntegrityFuneralPlanning.com