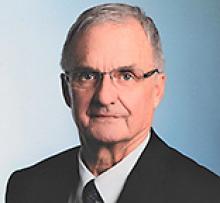 Survived by the love of his life, Leslie; children, Jon (Monique), Rob (Elisabeth), Erica (Colin); and eight grandchildren, Aliya, Eric and Kyra, William and Elin, Kiefer, Annika and Callen. Also, his sister Lynn (Doug); brothers, Mark (Debbie), Leif (Susan) and sister Ingrid. Along with sisters-in-law, Joanne Leven (Len) and Heather Watt; in addition to his many nieces and nephews.
Bill exhibited academic and leadership skills throughout his school years culminating in being awarded the Governor General's medal in his last year at Nelson McIntyre Collegiate in Norwood. He also served as President of the student body and took leading roles in the operettas. This love of music continued throughout his life. His passion in these early years was basketball and all his spare time was spent on a court.
Bill's life changed dramatically when he started University. He worked in Wood Buffalo National Park, NWT in the summer months where he learned carpentry skills and toiled as a labourer in the bush. In those five summers he became sufficiently proficient which allowed him to spend many spare hours, later in life, renovating and adding on to the family cottage acquired at Falcon Lake.
Bill started his lifelong relationship with Leslie in 1964, ultimately marrying in 1967. Their beloved children became the focal point of their lives from 1972 to the mid nineties. Bill spent many hours coaching Jon and Rob in hockey, and Erica in ringette.
After marrying Leslie in 1967, Bill entered the Faculty of Law at the University of Manitoba, graduating with the Gold Medal in 1970. Many close friends were made in these years and these relationships continue to this day. While in Law School, Bill developed a lifelong fascination with litigation and he and Leslie spent 1970 to 1971 in Ottawa while Bill clerked for a Supreme Court Justice. These early exposures only enhanced his career choice and he became a well known and highly respected litigator in not only Manitoba, but throughout Canada. Bill was competitive to a fault, whether in sports or the practice of his profession. He most enjoyed providing advice and service to those who were front line workers such as the police, teachers and healthcare workers. He was motivated to help those who suffered at the hands of the more powerful.
Bill believed fervently that litigation was an art form which required mentorship to perfect the applicable skills. Accordingly, he mentored several years under A. Kerr Twaddle and then under Vern Simonsen. In so doing, he began to practice what he preached and assisted many young lawyers to develop their skills similarly. It was with sheer pride that those who worked with him became excellent lawyers, many of whom continued to work in the law firm with him for many years.
Bill also believed it was the responsibility of a professional to give back to the profession. In 1986, he served as President of the Law Society of Manitoba. Over the years he spent many hours participating in lectures to the profession. He became known as being highly intelligent, fair to all he encountered and an unparalleled tactician.
For a number of years, Bill helped manage TDS and was appointed counsel to the firm for the last ten years before his retirement.
In later years, he served on the Board of Manitoba Blue Cross, developing more understanding of corporate life and making many close friends outside of the legal community.
While he shone academically and achieved much professionally, Bill would tell all that his life was best defined by his undying love for his wife Leslie, and their children, Jon, Rob and Erica. All his achievements were made possible by, and ultimately for, Leslie, who kept him appropriately grounded. They truly enjoyed each other's company, travelled much and befriended many.
To have children and to devote one's life to their development as mature adults is an unparalleled calling. Bill's life, outside of the practice of law, was centred on their children's needs and interests, and the pride and love Bill and Leslie had for Jon, Rob and Erica continued for all their lives. Their intelligence, honesty and sense of humour were more than Bill could have hoped for. His three children, their spouses and eight grandchildren were always truly the light of his life, enabling him to pass on with the certitude of each continuing their development into caring and contributing members of their community.
Bill was sensitive, caring and fun loving. His Golden Retrievers loved him unconditionally and he reciprocated. Many days were spent every year at the cabin at Falcon Lake and Bill valued the opportunities there to practice carpentry and to pass on his love for cottage life. Many hours were spent imparting some life lessons to his children and grandchildren. Many friends visited there over the years and that camaraderie was cherished.
While verbalizing his love for his wife, family and many friends did not come easy for him, Bill tried to convert his feelings through his actions. He was rewarded more than was due. He is passing with the comfort of this reciprocal love of his wife, children and grandchildren, and many friends.
Bill would also be remiss to not mention his deep gratitude for the sense of humour and dedication of Dr. Ken VanAmeyde, Head of Internal Medicine at the Health Sciences Centre, and his advice and care over the last few years. Ken always exhibited those traits of professionalism to which all professionals should aspire. His friendship was most appreciated.
Given the current COVID-19 pandemic restrictions, a Celebration of Life will be held later this year.