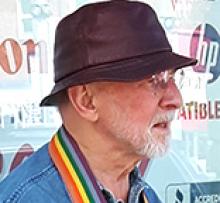 Roman Swiderek, Manitoba artist, died peacefully on April 8, 2020, at the age of 83 years.
Roman will be lovingly remembered by his life partner, Suzanne; his children, Monica, Yvonne, Robert (Stacey); and his grandchildren, Adrian (Jenny), Devon and Rylee.
Roman was born in Lodz, Poland. In 1961 he immigrated to Canada, and settled in Winnipeg with his young family.
From 1965 to 1989, he founded four companies with a design focus for the fashion industry in Winnipeg. In 1989, he put aside the business world to focus on his art.
Roman was an artist to his core. His travels across Canada, in his trusted Econoline, always included easels, paper, canvas, paint and pencils.
A thirteen year summer odyssey to the Alberta Columbia Icefields ended when the 1997 Red River Flood of the Century threatened his studio. During this time, Roman worked on a series of flood paintings, raising over $100,000 for Manitoba flood relief.
He is best known for his large collection of Winnipeg cityscapes, capturing landmarks and images of the city that people recognize and relate to.
Regardless of the project, and there were many, Roman always added an artistic element.
At Roman's request there will be no service.
He insisted his celebration of life was the retrospective art exhibition of his Winnipeg Cityscapes presented by Woodlands Gallery in March 2018.
A creative and artistic life well lived.