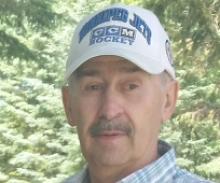 After a courageous battle with Cancer Greg, with his family by his side, passed away peacefully at home.
He will forever be remembered by his loving wife of 41 years, Debra; daughter Megan (Alvin) Yambao; son Justin, and grandson Hunter. Also left to cherish his memory his brother Ron; nephew Jeremy; niece Dawn (Craig) Morton and great nephew Knox; along with many dear friends who loved him.
Greg was born in Winnipeg and moved to Lower Fort Garry with his brother. They lived with his sister Betty (Nick) Feledechuk after the passing of their parents at a young age. He graduated from Selkirk Comprehensive and shortly after went to school to become a butcher at Thor's Meats. In 1977 Greg met the love of his life Debra and asked her to marry him after one week of dating. On September 30, 1978, after Debra graduated from nursing school, they were married and moved back to Winnipeg to start their life.
Greg was a skilled Butcher and was proud to work for Zied Food Fare Stores who he also considered his family. Greg had a passion for hockey, his skill, knowledge and love for the game contributed to the development of many players over the years. "Coach Burda" was well respected and made a huge impact, especially with Northwood Community Centre where he was a valued board member until his passing.
Cremation has taken place and a Celebration of Life will be held at a later date.
The family would like to thank CancerCare Manitoba for being with Greg every step of his journey. He was so touched by his experience with CancerCare Greg wanted nothing more than to give back by having a fundraiser called "Sports gives back to Cancer". In memory of Greg donations can be made to CancerCare Manitoba.