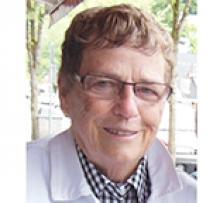 It is with heavy hearts that we announce the passing of Helen Louise McFarlane. Helen passed away at Oakview Place in Winnipeg, MB on February 16, 2020, at the age of 80 years.
Helen was born an identical twin to Betty Anne Anderson (nee McFarlane) on November 23, 1939, on the family farm at Gregg, MB. She was one of three daughters born to Ina (Williams) and Harvey McFarlane. Helen and Betty are survived by their younger sister Beverley McDonald of Carberry, MB.
Helen's greatest loves were her family: sister Bev McDonald (Wayne Finlayson), nieces, Shelley Hewins Brown (Paul) of Vancouver and Dallas McDonald of Carberry, nephews, Dale Anderson (Dana) of Dauphin and Ryan Anderson (Renee) of Winnipeg, nieces, Alyx Lyutina (Eduard), Kenzie Hewins (Lucas), Danika Hewins, Brett Anderson (Kyle) and Sophie Anderson, nephews, Brady Anderson (Dvonne), Grae Anderson, and special friends, Laurie MacDonald (Rob, Kristen) and Tracey Legary.
Helen received her education at Carberry Collegiate, Brandon College and taught mainly in grades 4 to 6 in the Winnipeg School Division. She taught at Grosvenor Elementary for several years, while completing her career at, and retiring from, Sargent Park.
Just as she was a dedicated teacher, she was also an accomplished athlete. She is remembered for playing highly competitive softball for many years with the Winnipeg Tigerettes. In 1965 the Canadian Ukrainian Athlete Club (CUAC) won the first Canadian Senior Ladies Softball Championship in Winnipeg, Manitoba. Helen had been picked up from the Tigerettes to play for them. She again played with the CUAC Blues to represent Manitoba in the Canada Summer Games held in Halifax-Dartmouth, Nova Scotia in 1969. She last represented Manitoba at the Canadians playing in Calgary in 1975 for the Canadian Polish Athletic Club (CPAC).
In 1992 Helen was inducted into the Manitoba Sports Hall of Fame as a member of the 1965 Canadian Championship CUAC Blues and in 2002 she was inducted into the Manitoba Softball Hall of Fame.
Helen was also a great curler who was proud to tell you about how she scored an "8 ender". She played out of the Fort Garry Curling Club for many years. Helen was an avid sports fan who enjoyed watching curling, the Winnipeg Jets, the Blue Jays and golf. She also enjoyed travel to the States in her motorhome with her dear friend, the late Lorraine MacDonald, photography, reading, animals and in recent years she enjoyed staying in touch with her family on her ipad.
Helen was predeceased by her mother Ina Williams and father Harvey McFarlane, twin sister Betty (McFarlane) Anderson, Aunt Verna (Williams) Vermander, and many more aunts and uncles.
Special thanks to the staff at Extendicare, Oakview Place for their loving care of our sister, aunt and friend.
Cremation has taken place and interment and a Celebration of Life will be held at a later date.
Friends that so desire, memorial donations can be made in Helen's memory to the Canadian Cancer Society or to a charity of choice.