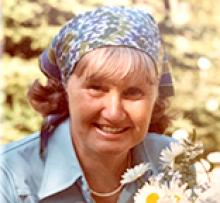 Luise Fiala, loving wife, mother, grandmother and great-grandmother, died peacefully in her sleep on Holy Saturday, April 11, 2020, at Grace Hospital, surrounded by the love of her family, near and far.
Luise was born January 8, 1927, to Karl and Aloisia Koll, in the highest house on the mountain in Heiligenblut, Carinthia, Austria. When she was only hours old, her auntie carried her down the mountain to be baptized and from that moment, Luise had a remarkable and loving devotion to her God. From the time she was a small child she took great comfort in her faith, in good times and in bad, and this devotion only grew stronger throughout her life. She lived her love of God and her kind and humble example drew others closer to Him as well.
When she was 19 years old she met the handsome soldier who would become the love of her life and husband of almost 73 years. He asked her to dance at a local fair and later that night as she walked up the stairs to her home, she thought, "This man I could marry."
They were married soon after and gave birth to their son John - a mischievous boy who used to play hooky from Kindergarten to play down by the river and then come running home at lunch when he heard the bell, so as not to be found out - a story she delighted in telling.
Nine years later their daughter Claudia was born and Luise followed her beloved Edi to Canada where they began a new life in Winnipeg. Soon after arriving, they began visiting Lake Winnipeg, a place that would come to embody the heart of their growing family, which now included their youngest daughter Cynthia.
They built a small cottage at Lester Beach that they trekked out to both summer and winter. She spent summers at the lake with her children and a lively circle of friends. After a week spent in the sun and the water, Luise and her children would eagerly await the weekends when Edi would arrive after work with bags of chocolate, candy and apples. These years were idyllic, full of long days at the beach, mushroom and blueberry picking in the forest, and nights of music, dancing and cottage parties.
In the late 1960s, Luise and Engelbert bought a small piece of forest near Belair. They cleared space for cabins by hand and built their paradise. Though Luise loved her life in Canada she was terribly homesick for the mountain meadows of her childhood in Austria which bloomed full of daisies and forget-me-nots every spring. On this land she planted daisies and forget-me-nots, sprinkling the dried seeds from any bouquets she picked until any inch of the land that wasn't covered in forest was a carpet of blue and white. Years later when her grandchildren arrived, they would sit among the flowers and she would make daisy crowns for their heads.
This was only the beginning of the magic that Luise and her Edi created for their beloved grandchildren. The grove of trees in front of their cabin was dubbed the Dwarf Forest, named for the Austrian mountain dwarves who lived there and who left little treats for the children to find. In the mornings, the raspberry fairy would leave cups of raspberries in front of the cabin door.
All summer Luise would make memories with her children and grandchildren, swimming at the beach in front of their cottage, playing store in the shop they built of stones, collecting the ladybugs that would appear every summer, and writing little love messages for her family out of pebbles on the shore.
During the day they would host spaghetti parties for their family - Edi would make his famous spaghetti and Luise would always make at least two beautiful salads with her signature homemade dressing. In the evenings they would welcome their family for a cozy cup of tea to warm up after the grandkids' evening swim. Tea always tasted best at Grandma and Grandpa's cottage.
As the years went on, their lakefront piece of heaven came to be the site of the weddings of two grandchildren, and their spaghetti parties - always full of music and laughter - continue, now with great-grandchildren at the table.
Luise, ever selfless and humble, left such a mark of love upon the world... her gentle kindness will be remembered by all who were lucky enough to know her. We are heartbroken to have had to say goodbye.
We will hold tight to all the memories we shared with her, her love of pancakes, waffles, syrups and jams, her love of music (especially the Carinthian folk music of her childhood and favourite singer Semino Rossi), her devotion to God and to her family.
Although she is physically no longer here with us, her light will continue to shine through the generations of the family that she lovingly built, and every time her daisies and forget-me-nots bloom, we will think of her.
Luise is survived and deeply missed by her husband Engelbert; her son Johannes (Shirley), stepgrandson Brian and his children, Aidan and Gavin, stepgranddaughter Carrie (Andy) and their children, Sophia and Zachary; her daughter Claudia (Jerry), granddaughters, Maria (Corey), and Christina (Brett) and their son Liam; her daughter Cynthia, grandchild Gwendolyn and her children, Braeden, Kaelynn, Rae Ann and Harley, and grandchild Christopher (Katrina) and their children, Natalie and George. She is also missed by her sister Hilda, and many family and friends in both Europe and Canada.
The family is grateful to Fr. Bohdan Lukie for his ongoing support and for officiating at the service. We are also grateful to the Palliative Care program and to the nurses at Grace Hospital who took such good care of Luise in the last days and weeks of her life.
In lieu of flowers, donations may be made in her memory to Lubov Foundation, Holy Family Nursing Home.
Private family services have been held.