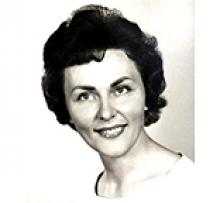 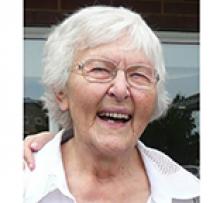 Helen Martens ("Tante Leni") passed away peacefully of heart disease at Pembina Place Mennonite Personal Care Home in Winnipeg, at the age of 92. She spent her last hours listening to sacred music and in the presence of family.
Helen was a remarkable woman and a gifted musician. Born in Stalinist, Russia, she was raised in a farming community near Sanford, Manitoba, the fourth of six children. She began formal training in piano performance at age 17, eventually studying piano at Juilliard and earning a PhD in musicology from Columbia University and a Licentiate from the Royal Schools of Music in England. She worked as a professor of music at Bluffton College, Ohio and at Conrad Grebel College at the University of Waterloo in Ontario.
In 1967, Helen founded the Inter-Mennonite Children's Choir, now in its 53rd year. Under her direction, the choir performed in New York, Pennsylvania, Germany, Netherlands, England, and Ontario, including at Rideau Hall in Ottawa for the then Prime Minister Pierre Elliott Trudeau.
Over the course of her career, Helen wrote several books and published numerous articles. Her first book, "Hutterite Songs," was based on her doctoral dissertation, and it established her as an authority on the music of the Amish, Hutterites, and Mennonites. It was her dissertation that brought her to the attention of Hollywood director Leonard Nimoy, who enlisted her to advise him on Hutterite theology and customs, and to assist in choosing the music, for his 1994 movie "Holy Matrimony."
Helen was a passionate researcher, and during a sabbatical to England in 1980 began reading letters by and about Felix Mendelssohn, many of which had never before been translated from the Gothic script. Over the following years, she made over 20 research trips abroad, discovering new information about Felix Mendelssohn and translating many of the over 9000 letters she had copied.
After her retirement, Helen moved to Winnipeg to be closer to family. She continued to be passionate about music and Mendelssohn, publishing two biographical books about the composer's life and works. To the very end, she was driven by her love of music and faith in God.
Helen is survived by siblings, Susan Froese, Peter Martens, and Anne Braun (Ernie Braun); and by nephews and nieces, Rick Froese, John Froese, Ingrid Froese, James Martens, Colleen Braun-Janzen, Lynne Martens, Christine Froese, Carla Braun, Val Braun, Angela Martens, Andrea Martens, and Lisa Martens. Preceding her were her parents, Jacob and Anna Martens; brothers, Bill Martens, John Martens; brother-in-law Dave Froese, and sister-in-law Ruth Martens.

"I have dedicated my life to music and my
journey has taken me all over the world.
I look back on my life with gratitude as
I recall the many unique and enriching
experiences that I was granted."
-- Helen Martens

The family wishes to express sincere gratitude to Dr. Christine Loepp and the rest of the team at Pembina Place for the compassionate care provided to Helen during her final years. They also extend gratitude for the care provided by the staff at Lindenwood Terrace, where she resided before her move to Pembina Place.
An interment service with a small number of family members will be held at Springstein Mennonite Church on April 17, 2020.
In lieu of flowers, those who wish may make a donation to Mennonite Central Committee.