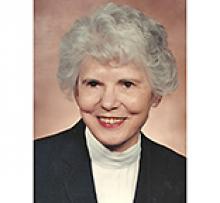 Shirlee Anne Smith died in Winnipeg on April 17, 2020.
She was predeceased by her husband, Richard Alfred Smith, and her parents, Wilson and Myrtle (Dwyer) Langille. She is survived by a large, extended, loving family.
Mrs. Smith spent almost her entire career working either directly or indirectly for the Hudson's Bay Company. In 1973 she was posted to London, England, to oversee the transfer of the Company's internationally known Archives to Winnipeg. The seven 20-ton containers arrived in October and November 1974 and the contents deposited in the Archives of Manitoba. She opened the collection to researchers the following April in the newly renovated building at 200 Vaughan Street. The Company later donated its archives to the People of Manitoba. Mrs. Smith resigned as Keeper, Hudson's Bay Company Archives, in 1990.
Mrs. Smith had held various directorships and served on a number of committees including being a Founding Director of Canada's National History Society, Director of the National Archival Appraisal Board, Member of the City of Winnipeg Advisory Committee of the Arts, and Past President of the Manitoba Historical Society.
Mrs. Smith was particularly active in the campaign to preserve Dalnavert, the home built in 1895 for Sir Hugh John Macdonald, son of Sir John A. Macdonald, the first Prime Minister of Canada. Today Dalnavert Museum and Visitors' Centre specializes in interpreting the history of the house and early Winnipeg.
An active Anglican, Mrs. Smith had an innate appreciation of Cranmer's prayers, church liturgy, and church architecture.
Mrs. Smith's awards and honours included Membership in the Order of Canada, the Distinguished Service Award from University of Manitoba, the Prix Manitoba Award for Distinguished Service - Vocational, and an Honorary Doctorate in Canon Law from St. John's College, Winnipeg.
Mrs. Smith wished to thank her family physician, Dr. John Mayba; Dr. Jeff W. Saranchuk; staff at both the Health Sciences Centre Winnipeg and the WRHA Palliative Care Program; and her family and many friends who were so attentive during the last three years of her life.
At the specific request of the deceased there will be no funeral/memorial service. The body has been cremated and the ashes will be interred in the family plot at the Mountain Road Cemetery, River John, Nova Scotia, according to the Rites of the Anglican Church of Canada.
If friends wish, donations in Mrs. Smith's memory may be made to St. George's Anglican Church Memorial Fund, 168 Wilton Street, Winnipeg, MB R3M 3C3 or Manitoba Historical Society, 710A – 1 Lombard Place, Winnipeg, MB R3B 0X3.

Peacefully on Friday, April 17, 2020, Shirlee died in Winnipeg.
At Shirlee's request no funeral service will be held in Winnipeg and there will be a private interment in Nova Scotia.
Longer notice to follow.