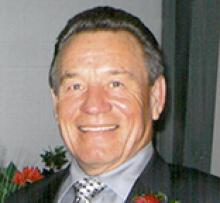 With heavy hearts we announce the passing of our beloved husband, father, and grandpa, Marvin Terry Prystupa on Saturday, April 18, 2020, at the age of 71.
Marvin will be forever missed by his wife of 48 years, Joanne (Mauthe); his two sons, Ryan (Laura) and Michael (Caitlan); and his three grandchildren, who he adored, Kaleb, Maxwell, and Hailey. Also survived by sisters, Stella Uruski (Steve), Adele Monasterski, Theresa; brothers, John (Helene) and Leonard; and many nieces and nephews.
He was predeceased by his parents, Anton and Olga; and siblings, Sr. Joan Marie, Zennovia MacDonald, Savella Mankewich, and Orest.
Our Dad grew up on the family farm located by Warren and later Stonewall. Graduated from Stonewall Collegiate and received his education degree from the University of Manitoba. He spent 32 years with the Seven Oaks School Division as a teacher, vice-principal, and principal.
Marvin shared the best of country living with his own family. In 1979, he returned to his roots where he built a home and enjoyed his small cow/calf operation.
Dad's love of the outdoors was shared with family and friends making countless memories of fishing, hunting, and camping trips, as well as the good times spent at the cabin in Sandy Hook.
For 14 years Marvin and Joanne wintered in South Texas making many friends and happy memories. Their favourite part was sharing their little place with the kids and grandkids when they would visit.
Cremation has taken place and a celebration of his life will be held at a later date.
In lieu of flowers, please consider a donation in Marvin's memory to CancerCare Manitoba, specifically for sarcoma research.