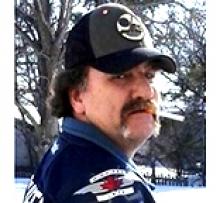 It is with heavy hearts, that we announce the sudden passing of George Alvin Russell Hall on Sunday morning, April 19, 2020, at the Selkirk & District General Hospital. George was 61 years of age, born June 7, 1958. He is now with his buddy Mister Raskal.
Left to cherish his memory is his daughter Sylvia Pongratz, whom he loved so very much, and Colleen Magnusson, his sweetheart of 16 years, along with his favourite brother Arthur, and George and Colleen's siblings and their spouses.
He was predeceased by his parents, Alvina and Percy, as well as some of his siblings. He was the second youngest of 23.
George was a big part of his family. He's been there through it all, seen it all, and heard it all!
George was blessed with a huge family full of step-grandchildren, nieces, nephews, and their children, and their babies, whom he loved with his whole heart! Their eyes would light up when Uncle George was around! He always left them laughing!
Even though he hadn't drank for almost
forty years, you wouldn't know it!! He was
always the life of the party! George had a quick wit and a sarcastic remark when
needed. He was very loving, caring, and
kind-hearted, and would go out of his way when help was needed. He lived by the truth and a handshake would seal a deal. George worked hard his whole life, and never left a job unfinished. He loved his Winnipeg Jets and his Die-Cast car collection, along with his love for a good ride under his steering wheel on his way to his favourite fishing spot.
George will be missed dearly.
George had worked many years at Palliser Furniture when he was younger, before he moved on to Quantas Flooring, where he had worked until his passing.
We extend our heartfelt gratitude to the ambulance staff for their quick response, and to the emergency staff of the Selkirk &
District General Hospital for their genuine care and compassion, and to Interlake
Cremation and Memorial Services in Selkirk for their sincere kindness in this sad time. They are all truly appreciated.
Due to social distancing, a celebration of George's life will be held at a later date.