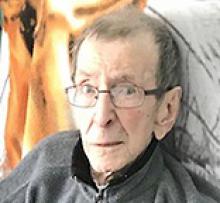 
Terry peacefully passed away Sunday, April 19, 2020, at the age of 90.
Terry is survived by his loving wife, Helen, of 66 years. He will be dearly missed by his children, Bill (Colleen) and Cheryl (John); grandchildren, Blair, Mark, Nicole (Brendan), Kaitlin (Michael), Zachary; great-grandchild, Daxton; and numerous nieces and nephews in Vancouver.
Terry was very passionate about spending time with family, golfing (until 88!), curling, and thoroughly enjoyed his home away from home (or summers) at Lilac Resort. He was a member of The Ukrainian Orthodox Cathedral of St. Ivan Suchavsky, where he helped make perogies with his wife every week. Terry and Helen were a wonderful team, and were sure to be found together wherever they were.
Private prayers will be held on Thursday, April 23, 2020, at Cropo Funeral Chapel.
Flowers are gratefully declined. In lieu of flowers, donations may be made to a charity of one's choice.