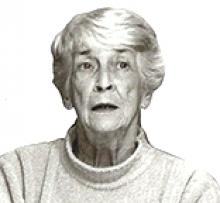 
Unexpectedly, on Tuesday, March 10, 2020, at the Health Sciences Centre, Joan passed away at the age of 79.
She was predeceased by her parents, Martha and John; her sister Donna, and brother Patrick.
Joan will be sadly missed by her husband Norm; son Robert (TD); brothers, Tom (Dianna) Woodward and Dennis (Beverley) Woodward; and sister Madeline (Brad) McKenzie. She will also be lovingly remembered by her nephews, Scott (Tamra) McKenzie and Duwayne (Heather) Woodward; niece Erin McKenzie; as well as several grand nephews and nieces.
Joan was an avid and skilled five pin bowler. At a time when there was still a counter pin, she regularly averaged 230-245 - quite a feat! She also represented Winnipeg and later Vancouver at the national championships many times.
Joan was a very social person and many of her happiest times took place at the gas station where she worked later in life. She greeted her 'regulars' with a "Hi, hon" or "How's it going, kiddo?" and many became friends who visited often for a greeting and smile from Joan.
The family would like to extend a thank you to the staff of Action Marguerite who welcomed her weekly and to the friends she made in the program.
As per Joan's wishes, cremation has taken place and a private family graveside service will be held at a later date.
While flowers are gratefully declined, friends who wish may donate to The War Amps, 2827 Riverside Drive, Ottawa, Ontario K1V 0C4 or a charity of your choice.