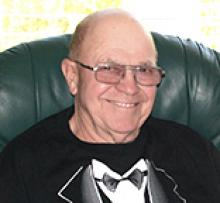 It is with sad hearts that we announce the passing of beloved husband, dad, and grandpapa, Alain Louis Remillard, on April 28, 2020, at St. Boniface Hospital, a week after his 84th birthday.
Alain was a devoted and loving husband, dad and grand-papa and leaves to morn his wife Irma Remillard; three kids, Gisele Remillard (Ron Kraichy), Alice (David) Walker, and Paul (Barby) Remillard; two sister-in-laws, Berthe Remillard and Ann Remillard; five grandkids, Christine, Bryan, Devon, Dorian and Gray Allison; one great-grandchild Julian, and many other extended family and friends.
He was predeceased by his parents, Horace and Gabrielle Rémillard; and his brothers, François and Yves.
A private family burial will take place and a longer obituary will precede a memorial service that will be held at later date when large gatherings are permitted.

Condolences and messages can be emailed to
gisele.remillard@hotmail.com
or mailed to Irma Remillard and family,
care of: Eternal Grace Funerals,
1111 Logan Ave., Winnipeg MB R3E 1R1.