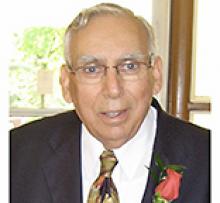 Paul Cholakis passed away Sunday, May 3, 2020, just shy of his 92nd birthday.
He leaves his beloved wife of 59 years, Catherine (nee Boulukos), son Ernest Paul (Gillian), son Costa (Noni Classen), son Elias (Vera), grandchildren: Alexander, Sofia and Paul, step-grandchildren: Riley and Sydney, his youngest brother Leo (Frances), and sister-in-law Marina.
Paul was the middle child of Ernest J. and Helen (nee Papageorge) Cholakis' five boys. He was predeceased by his parents, his older brother John (Evangeline), older brother Harry, and younger brother Chris (Lillian).
Paul was born and raised in Winnipeg spending his formative and schooling years in Norwood before attending St. Paul's High School (at its then location on Ellice Avenue). From a young age he was active in Broadway Florists (the family business started by his father in 1923). He spent his entire working life in the business which included the flower shop on Portage and Smith and the greenhouse on Albany Street. Guidance and nurturing from his father and commitment to his family forged a strong, lifelong work ethic and love in the beauty of flowers, art and gardening.
The passion of sport was a focal point in his life from an early age. He was an advocate of the traits and characteristics that sports developed in a person - such as teamwork, commitment, leadership, accountability, discipline and a sense of fair play. He was an avid speed-skater representing Manitoba in his teens in competitions in Minnesota and across Western Canada. At St. Paul's he was introduced to organized football along with his brother Harry. This led to a lifetime friendship with George Depres where the tandem first became known as the "Touchdown Twins", their relationship carried to the next level with the Winnipeg Rods followed by two years with the Winnipeg Blue Bombers (1948 to 1950). His time playing football earned him his lifetime nicknames "Choo Choo" and "Chooch". He stayed active in sports as a lifelong member of the Winnipeg Squash Club and Niakwa Golf and Country Club.
Paul was proud of his Greek Heritage and was an active participant in the Greek community. He served on the St. Demetrios Greek Orthodox Church board and was part of the team instrumental in building the church at its current location on Grant Avenue, after he helped secure the land for the new church. He was Canadian District Governor of AHEPA, a Greek organization whose mission is to promote Hellenism and its ideals - commitment to humanity, liberty, democracy, education, philanthropy and individual and family excellence. He and Cathy also served as ambassadors for the Greek Pavilion at Folklorama.
The strong values he received from his parents and the Jesuits at St. Paul's became ingrained in him for life and are reflected in his commitment to the community. Paul served as a Honorary Aides-de-Camp for Lieutenant Governor Francis Jobin, along as a board member of the Health Sciences Corporation, a Canadian board member of the FTD association, a director of the Winnipeg Blue Bombers, a director of the Winnipeg Enterprises Corporation and a lifelong member of the Lions Club of Winnipeg.
Paul's focus in life was his faith, his friends and above all his family. To meet Paul was to receive a bright smile, a powerful handshake and a piece of advice or a word of encouragement. Paul was devoted to Cathy and his family. He supported all of his boy's activities, instilling in them the necessary traits and attributes to be positive contributors to society. He provided the same energy and devotion to his grandkids' activities and interests.
Our family would like to extend sincere thanks to the staff at Tuxedo Villa for their care and support of Paul the last few months.
A private family service will take place due to the restrictions of COVID-19. A celebration of Paul's life will be announced at a future date when regulations permit.
Donations in Paul's memory can be made to St. Demetrios Greek Orthodox Church, 2255 Grant Avenue, Winnipeg MB R3P 0S2, Phone 204-889-8723, Email: greekcom@mymts.net, Alzheimer Society Manitoba, 10-120 Donald Street, Winnipeg, MB R3C 4G2, Phone 204-943-6622, Email: alzmb@alzheimer.mb.ca.
On a personal level, Paul would take great delight if you planted a rose bush in your garden this season.