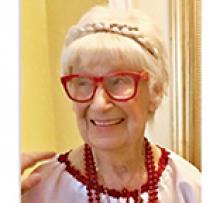 Anna Rita Babey was born on September 27, 1922, in Hafford, Saskatchewan. She died May 4, 2020, at age 97, in the Month of Blessed Mary, at Oasis New Horizons Tower, Toronto where she received exemplary care for over two years and also for COVID19.
Anna was a proud Canadian and Ukrainian. A devout Catholic. A Matriarch. The oldest living descendant of Wasylyna and Theodore Zipchen, one of Saskatchewan's earliest pioneers.
Anna was the fourth born of twelve children in the homesteader family of Paraskevia Zipchen Hunchak and Alex Hunchak. She grew up on the Canadian prairies during the Great Depression and "dirty thirties".
Ukrainian was Anna's first language, learning English only after going to Nauka school in Hafford. She was proficient in both languages, a lifelong writer of journals, stories and cookbooks, all with magnificent script.
In her teens, Anna worked as a housekeeper in Saskatoon, until she was beckoned home to the farm to help raise younger siblings.
In 1942, she began correspondence with a young Ukrainian immigrant, Paul Babey. On meeting in person several months later, it was love at first sight. Two weeks after meeting, they married in Hafford's Holy Eucharist Ukrainian Catholic Church on September 29, 1942.
Within days, they boarded a train to Winnipeg to begin married life. They settled in Transcona where Paul worked at the CNR shops. They raised their seven children in the heart of Transcona in the Ukrainian Catholic faith at St. Michael's Ukrainian Catholic Church. All neighbours were like family to the Babeys.
Paul and Anna made a formidable team. Together raised a family according to their values and the Catholic faith. Typical of the era, Paul was the breadwinner, family provider, handyman and gardener. Anna was the homemaker who cooked, sewed, taught the children, and volunteered at the church teaching Sunday School, working with the Ukrainian Catholic Women's League and always helping elderly neighbours. She was humble, pious and faith-filled. On most evenings, on bended knees she led the family in praying the rosary. She attended Divine Liturgy daily or as often as she could.
Traditional holidays and holy days were always celebrated by attending Mass and hosting family meals. Forever cheerful, Anna always said: "I've never known depression…" Even in sadness and misfortune, Anna found humour. Her laugh was strong and infectious. She saw beauty all around her. In small things. In detail. She had style, was a lovely dresser, always fashionable.
Anna was a lifelong learner. A creative cook. A hairdresser. Breadmaker. Korovai creator. An ardent Scrabble player. A problem solver. An inveterate reader. An artist of portraits and paintings. An avid obituary reader. Clothing designer. Curiosity seeker. Health enthusiast. When her children learned to swim, piano, typing; Anna learned alongside them.
As her children grew, Anna's life changed. Paul developed medical conditions and retired from the CNR. For the next 22 years, Anna was Paul's loving care-giver wife. For four of those years, Anna also provided care for her father Alex who lived with them. Throughout, Anna continued her church work. She also developed her volunteer worker expertise through Holy Family Nursing Home and other work. During these years she and Paul welcomed the birth of grandchildren.
After Paul died in 1986, Anna moved between Winnipeg and Toronto. In both places she continued her volunteer work: feeding street people, feeding elderly ill in hospitals, and working in nursing and retirement homes.
Anna travelled the world. She visited Europe, Holy Land, Hawaii, other States, the Caribbean, South Africa and Zimbabwe Africa. In Zimbabwe, Anna started and developed a program for street children and AIDS orphans. This later became a permanent program, the first of its kind in the country.
Anna made friends everywhere she lived on Ravelston and Victoria Avenues in Transcona and St. John's Haven Retirement Home where she last lived in Winnipeg before heading to Toronto to New Horizons Tower. Her friends, her children and their children were always uppermost in her mind and heart until her very last day.
Anna was predeceased by her parents, husband Paul, son Jeffrey, grandson Nicholas; brothers and their wives: Steve, Peter, Nick and Sophie, Walter and Sophie, Mike, and sister Olga and husbands, Mike and Paul. Also predeceased are brothers-in-law, Michael Kishensky, John Zelanko and John Lovelace.
Anna is survived by a very large extended family, as well as her brothers, Bill (Edna) and Paul (Margaret); and her sisters, Natalie, Victoria SSMI and Joan; as well as sister-in-law Donna Hunchak. Also surviving her are children, Bob (Stephanie), Donna (Eric), Paulette (Frank), Josephine (Roger), Joanne (Maurice), Marianna (Tom); and her best friend Boris (Denise) Fediusko. Her grandchildren, Tammy (Sheri), Lisa (Sharon), Paula (Quin), Ryan (Amy), Michael, Marston, and Amber (Darren). She was blessed with great-grandchildren, Eden, Bria, Tristyn and Ruby and stepgreat-grandchildren, Coral, Keylee, Kayden and Aiden. Also surviving Anna are many dear nieces, nephews, cousins and friends.
Special gratitude to staff of New Horizons Tower: Tania Nougueria, Justine Bush, Dr. Jenny Hsueh, as well as Dr. Graham Smith and Dr. Paul McHardy for Anna's care over the last few years.
In Anna's memory, donations may be made to Covenant House Toronto, www.covenanthousetoronto.ca or CancerCare Manitoba Foundation.
A memorial service will be held at Rosar-Morrison Funeral Home with Monsignor James Hannah officiating. Date to be determined.
A Memorial Divine Liturgy will be held at Hafford, Saskatchewan at the Holy Eucharist Ukrainian Catholic Church with burial at the Zipchen Family Cemetery in Hafford at a date when travel and other COVID19 restrictions are lifted.

Eternal rest grant unto Anna, O Lord
and may the souls of the faithfully
departed Rest in Peace. Amen
May God welcome Anna into His loving arms
May she soar with the angels
May her memory be eternal
Vichnaya Pamyat!